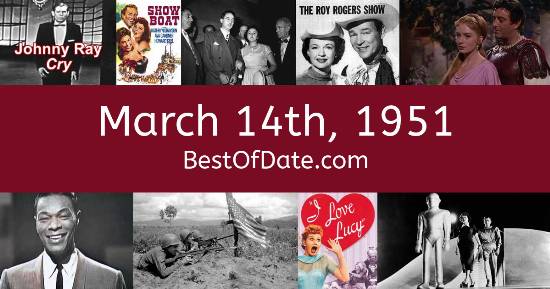 The date is March 14th, 1951 and it's a Wednesday. Anyone born today will have the star sign Pisces. Spring has started to creep in and the days are beginning to get longer.

St. Patrick's Day is just around the corner. In music, the song "Be My Love" by Mario Lanza is the best-selling record at the moment. Harry S. Truman is currently the President of the United States and Clement Attlee is the Prime Minister of the United Kingdom.

On TV, people are watching popular shows such as "The Ed Sullivan Show", "Space Patrol", "The Gene Autry Show" and "The Jack Benny Program". Children and teenagers are currently watching television shows such as "Looney Tunes", "Tom and Jerry" and "Crusader Rabbit".

Who was the Prime Minister of the United Kingdom on March 14th, 1951?

Enter your date of birth below to find out how old you were on March 14th, 1951.

Looking for some nostalgia? Here are some Youtube videos relating to March 14th, 1951. Please note that videos are automatically selected by Youtube and that results may vary! Click on the "Load Next Video" button to view the next video in the search playlist. In many cases, you'll find episodes of old TV shows, documentaries, music videos and soap dramas.