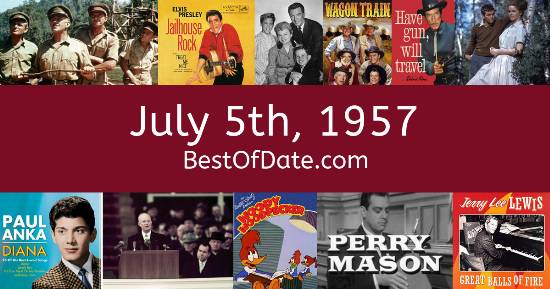 The date is July 5th, 1957 and it's a Friday. Anyone born today will have the star sign Cancer. Currently, people have "that Friday feeling" and are looking forward to the weekend.

The 4th of July celebrations in America have come and passed. It's summer, so the temperatures are warmer and the evenings are longer than usual. In music, the song "Love Letters in the Sand" by Pat Boone is the best-selling record at the moment.

Dwight David Eisenhower is currently the President of the United States and Harold Macmillan is the Prime Minister of the United Kingdom. In fashion, women are sporting chemise dresses, sheaths, sack dresses and straight-cut suits. Short boxy jackets and shift dresses are also beginning to become popular. Meanwhile, a lot of men are sporting a "Teddy Boy" style that involves leather jackets, greased-back hair, extremely narrow trousers and velvet-collared jackets. Men are also wearing formal suits as daywear. Tailfins on cars are extremely popular at the moment. The design looks futuristic, almost like a rocket or the twin rudders on the back of an airplane.

It's 1957, so radio stations and jukeboxes are playing songs from singers such as Elvis Presley, Pat Boone, The Diamonds, Tab Hunter, Jimmy Dorsey, Guy Mitchell, Perry Como and Sonny James. On TV, people are watching popular shows such as "The George Burns and Gracie Allen Show", "The Jack Benny Program", "Gunsmoke" and "Fury". Children and teenagers are currently watching television shows such as "Tom and Jerry", "Adventures of Superman", "Mighty Mouse Playhouse" and "The Gumby Show".

Celebrities, historical figures and noteable people who were born on the 5th of July:

Who was the Prime Minister of the United Kingdom on July 5th, 1957?

Enter your date of birth below to find out how old you were on July 5th, 1957.

Looking for some nostalgia? Here are some Youtube videos relating to July 5th, 1957. Please note that videos are automatically selected by Youtube and that results may vary! Click on the "Load Next Video" button to view the next video in the search playlist. In many cases, you'll find episodes of old TV shows, documentaries, music videos and soap dramas.

Here are some fun statistics about July 5th, 1957.