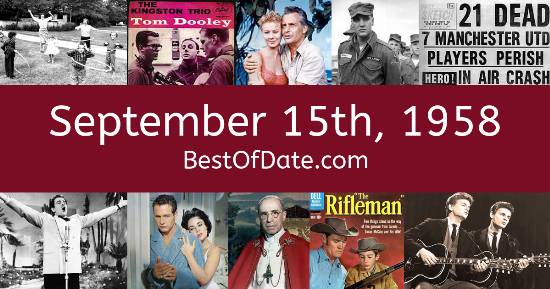 The date is September 15th, 1958 and it's a Monday. Anyone born today will have the star sign Virgo. Schools have started back and autumn has arrived, so temperatures have started to cool and trees are beginning to shed their leaves.

The earthy smells of fall have started to fill the air. In music, the song "Volare (Nel blu dipinto di blu)" by Domenico Modugno is the best-selling record at the moment. Dwight David Eisenhower is currently the President of the United States and Harold Macmillan is the Prime Minister of the United Kingdom.

A new plastic toy called the "Hula Hoop" has become the latest fad. The hoop, which can be twirled around your waist and limbs, has exploded in popularity since July. If you were to travel back to this day, notable figures such as Buddy Holly would be still alive. On TV, people are watching popular shows such as "The Ed Sullivan Show", "You Bet Your Life", "Gunsmoke" and "Perry Mason".

Children and teenagers are currently watching television shows such as "Tom and Jerry", "Lassie", "Heckle and Jeckle" and "The Woody Woodpecker Show".

Children's cartoons and Teen TV shows that were being aired on this date in 1958.

If you are looking for some childhood nostalgia, then check out September 15th, 1964 instead.

English prince.
Born on September 15th, 1984
He was born exactly 26 years after this date.

Dwight David Eisenhower was the President of the United States on September 15th, 1958.

Harold Macmillan was the Prime Minister of the United Kingdom on September 15th, 1958.

Enter your date of birth below to find out how old you were on September 15th, 1958.

Here are some fun statistics about September 15th, 1958.