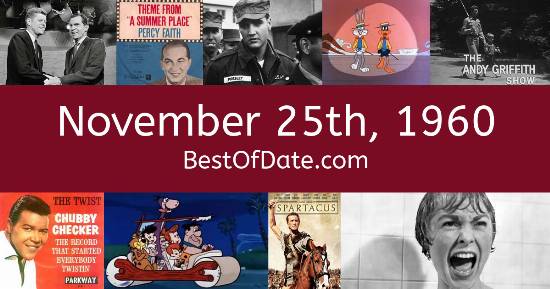 Songs that were on top of the music singles charts in the USA and the United Kingdom on November 25th, 1960.

The date is November 25th, 1960 and it's a Friday. Anyone born today will have the star sign Sagittarius. Currently, people have "that Friday feeling" and are looking forward to the weekend.

It is Black Friday in the United States - a day that many consider to be the start of the Christmas shopping season. It's November, so the evenings are getting darker and the days are getting colder. In America, the song Stay by Maurice Williams & The Zodiacs is on top of the singles charts.

Over in the UK, It's Now Or Never by Elvis Presley is the number one hit song. Dwight David Eisenhower is currently the President of the United States and the movie BUtterfield 8 is at the top of the Box Office. In the United Kingdom, Harold Macmillan is the current Prime Minister.

If you were to travel back to this day, notable figures such as Ernest Hemingway would be still alive. On TV, people are watching popular shows such as "Perry Mason", "Rawhide", "The Untouchables" and "The Andy Griffith Show". Kids and teenagers are watching TV shows such as "Lassie", "Father Knows Best", "The Gumby Show" and "The Many Loves of Dobie Gillis".

Popular toys at the moment include the likes of the Hula Hoop, Fisher Price Little People, Barbie and Astrobase.

If you are looking for some childhood nostalgia, then check out November 25th, 1966 instead.

Soccer player.
Born on November 25th, 1981
He was born exactly 21 years after this date.

Dwight David Eisenhower was the President of the United States on November 25th, 1960.

Harold Macmillan was the Prime Minister of the United Kingdom on November 25th, 1960.

Enter your date of birth below to find out how old you were on November 25th, 1960.

Here are some fun statistics about November 25th, 1960.