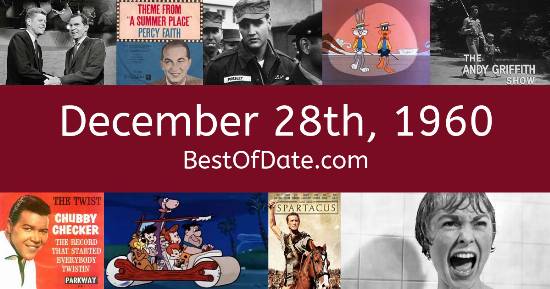 Songs that were on top of the music singles charts in the USA and the United Kingdom on December 28th, 1960.

The date is December 28th, 1960 and it's a Wednesday. Anyone born today will have the star sign Capricorn. Christmas Day of 1960 has just passed and many people are relaxing at home and enjoying the holiday season.

In fashion, many of the trends from the late 1950s are still popular. Women are wearing tailored skirts, short boxy jackets and shift dresses. Trousers are also becoming popular amongst women. Meanwhile, men are wearing polo shirts, argyle socks, sweater vests, loafers and harrington jackets. If you were to travel back to this day, notable figures such as Ernest Hemingway would be still alive. On TV, people are watching popular shows such as "The Jack Benny Program", "The Danny Thomas Show", "Have Gun - Will Travel" and "77 Sunset Strip".

Kids and teenagers are watching TV shows such as "Lassie", "Mighty Mouse Playhouse", "The Ruff and Reddy Show" and "Snooper and Blabber". If you're a kid or a teenager, then you're probably playing with toys such as Play-Doh, the Frisbee, the Hula Hoop and Astrobase.

If you are looking for some childhood nostalgia, then check out December 28th, 1966 instead.

Dwight David Eisenhower was the President of the United States on December 28th, 1960.

Harold Macmillan was the Prime Minister of the United Kingdom on December 28th, 1960.

Enter your date of birth below to find out how old you were on December 28th, 1960.

Here are some fun statistics about December 28th, 1960.