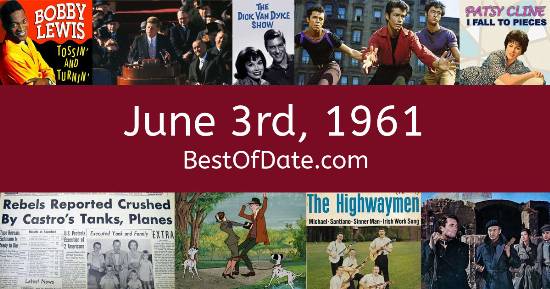 Songs that were on top of the music singles charts in the USA and the United Kingdom on June 3rd, 1961.

The date is June 3rd, 1961, and it's a Saturday. Anyone born today will have the star sign Gemini. Currently, people are enjoying their weekend.

It's summer, so the temperatures are warmer and the evenings are longer than usual. In America, the song Travelin' Man by Ricky Nelson is on top of the singles charts. Over in the UK, Surrender by Elvis Presley is the number one hit song.

John Fitzgerald Kennedy is currently the President of the United States, and the movie The Young Savages is at the top of the Box Office. In the United Kingdom, Harold Macmillan is the current Prime Minister. Tailfins on cars are extremely popular at the moment. The design looks futuristic, almost like a rocket or the twin rudders on the back of an airplane.

On TV, people are watching popular shows such as "Gunsmoke", "Tonight Starring Jack Paar", "Have Gun - Will Travel" and "The Many Loves of Dobie Gillis". Children and teenagers are currently watching television shows such as "Heckle and Jeckle", "Noggin the Nog", "Augie Doggie and Doggie Daddy" and "The Bugs Bunny Show". If you're a kid or a teenager, then you're probably playing with toys such as Wooly Willy, Metal House robots, Crater Critters and Tonka trucks.

These are trending news stories and fads that were prevalent at this time. These are topics that would have been in the media on June 3rd, 1961.

News stories and other events that happened around June 3rd, 1961.

Check out our personality summary for people who were born on June 3rd, 1961.

Television shows that people were watching in June, 1961.

If you are looking for some childhood nostalgia, then you should check out June 3rd, 1967 instead.

Journalist.
Born on June 3rd, 1967
He was born exactly 6 years after this date.

German soccer player.
Born on June 3rd, 1992
He was born exactly 31 years after this date.

John Fitzgerald Kennedy was the President of the United States on June 3rd, 1961.

Harold Macmillan was the Prime Minister of the United Kingdom on June 3rd, 1961.

Find out what your age was on June 3rd, 1961, by entering your DOB below.
This information is not saved on our server.

Here are some fun statistics about June 3rd, 1961.