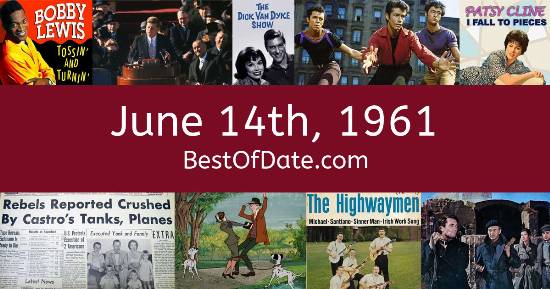 These songs were on top of the music charts in the United States and the United Kingdom on June 14th, 1961.

The movie "The Pleasure of His Company" was at the top of the Box Office on this day.

The date is June 14th, 1961, and it's a Wednesday. Anyone born today will have the star sign Gemini. It's summer, so the temperatures are warmer and the evenings are longer than usual.

In America, the song Travelin' Man by Ricky Nelson is on top of the singles charts. Over in the UK, Surrender by Elvis Presley is the number one hit song. John Fitzgerald Kennedy is currently the President of the United States, and the movie The Pleasure of His Company is at the top of the Box Office.

Because it's 1961, radio stations are playing hit songs from artists such as Bert Kaempfert, Chubby Checker, Elvis Presley, Del Shannon, Bobby Lewis and Jimmy Dean. If you were to travel back to this day, notable figures such as Ernest Hemingway and Marilyn Monroe would be still alive. On TV, people are watching popular shows such as "The Ed Sullivan Show", "You Bet Your Life", "Have Gun - Will Travel" and "Perry Mason".

Children and teenagers are currently watching television shows such as "The Adventures of Spunky and Tadpole", "The Huckleberry Hound Show", "The Rifleman" and "Davey and Goliath". If you're a kid or a teenager, then you're probably playing with toys such as Playpal dolls, Tonka trucks, Troll doll and Etch A Sketch.

These are trending news stories and fads that were prevalent at this time. These are topics that would have been in the media on June 14th, 1961.

Check out our personality summary for people who were born on June 14th, 1961.

Television shows that people were watching in June, 1961.

If you are looking for some childhood nostalgia, then you should check out June 14th, 1967 instead.

John Fitzgerald Kennedy was the President of the United States on June 14th, 1961.

Harold Macmillan was the Prime Minister of the United Kingdom on June 14th, 1961.

Enter your date of birth below to find out how old you were on June 14th, 1961.
This information is not transmitted to our server.