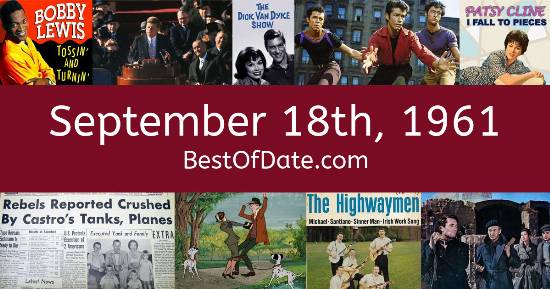 These songs were on top of the music charts in the United States and the United Kingdom on September 18th, 1961.

The movie "Come September" was at the top of the Box Office on this day.

The date is September 18th, 1961, and it's a Monday. Anyone born today will have the star sign Virgo. Schools and colleges are starting again and Autumn has officially arrived. As a result, temperatures are beginning to cool and trees are starting to shed their leaves.

The earthy smells of fall have started to fill the air. In America, the song Take Good Care Of My Baby by Bobby Vee is on top of the singles charts. Over in the UK, Reach For The Stars / Climb Ev'ry Mountain by Shirley Bassey is the number one hit song.

John Fitzgerald Kennedy is currently the President of the United States, and the movie Come September is at the top of the Box Office. In the United Kingdom, Harold Macmillan is the current Prime Minister. Tailfins on cars are extremely popular at the moment. The design looks futuristic, almost like a rocket or the twin rudders on the back of an airplane.

On TV, people are watching popular shows such as "The Ed Sullivan Show", "Perry Mason", "Danger Man" and "Route 66". Kids and teenagers are watching TV shows such as "Lassie", "Heckle and Jeckle", "Snooper and Blabber" and "The Yogi Bear Show". If you're a kid or a teenager, then you're probably playing with toys such as BAS-KET Miniature Basketball, Wooly Willy, Metal House robots and Tonka trucks.

These are trending news stories and fads that were prevalent at this time. These are topics that would have been in the media on September 18th, 1961.

Check out our personality summary for people who were born on September 18th, 1961.

Television shows that people were watching in September, 1961.

If you are looking for some childhood nostalgia, then you should check out September 18th, 1967 instead.

Actress.
Born on September 18th, 1971
She was born exactly 10 years after this date.

Rapper / Television host.
Born on September 18th, 1974
He was born exactly 13 years after this date.

Brazilian soccer player.
Born on September 18th, 1976
He was born exactly 15 years after this date.

Soccer player.
Born on September 18th, 1998
He was born exactly 37 years after this date.

John Fitzgerald Kennedy was the President of the United States on September 18th, 1961.

Harold Macmillan was the Prime Minister of the United Kingdom on September 18th, 1961.

Enter your date of birth below to find out how old you were on September 18th, 1961.
This information is not transmitted to our server.

Here are some fun statistics about September 18th, 1961.