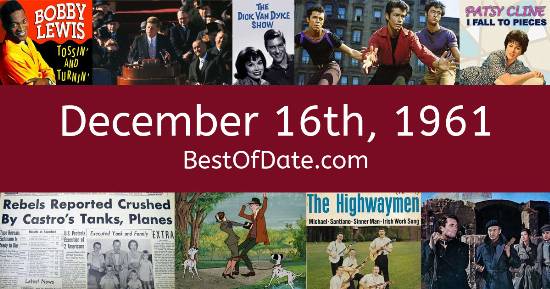 These songs were on top of the music charts in the United States and the United Kingdom on December 16th, 1961.

The movie "King of Kings" was at the top of the Box Office on this day.

The date is December 16th, 1961, and it's a Saturday. Anyone born today will have the star sign Sagittarius. Currently, people are enjoying their weekend.

The Christmas season of 1961 is in full swing. People are putting up their decorations and festive songs are playing on the radio. In America, the song Please Mr. Postman by The Marvelettes is on top of the singles charts. Over in the UK, Tower Of Strength by Frankie Vaughan is the number one hit song.

John Fitzgerald Kennedy is currently the President of the United States, and the movie King of Kings is at the top of the Box Office. In the United Kingdom, Harold Macmillan is the current Prime Minister. Tailfins on cars are extremely popular at the moment. The design looks futuristic, almost like a rocket or the twin rudders on the back of an airplane.

On TV, people are watching popular shows such as "What's My Line?", "Wagon Train", "The Twilight Zone" and "Route 66". Kids and teenagers are watching TV shows such as "Dennis the Menace", "The Adventures of Rocky and Bullwinkle and Friends", "The Bugs Bunny Show" and "The Yogi Bear Show". If you're a kid or a teenager, then you're probably playing with toys such as Wooly Willy, Matchbox toy cars, Tonka trucks and Etch A Sketch.

These are trending news stories and fads that were prevalent at this time. These are topics that would have been in the media on December 16th, 1961.

Check out our personality summary for people who were born on December 16th, 1961.

Television shows that people were watching in December, 1961.

If you are looking for some childhood nostalgia, then you should check out December 16th, 1967 instead.

German soccer player.
Born on December 16th, 1988
He was born exactly 27 years after this date.

John Fitzgerald Kennedy was the President of the United States on December 16th, 1961.

Enter your date of birth below to find out how old you were on December 16th, 1961.
This information is not transmitted to our server.

Here are some fun statistics about December 16th, 1961.