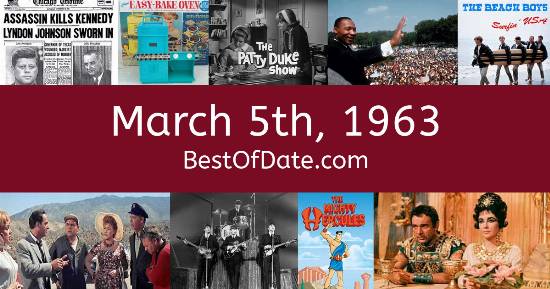 Songs that were on top of the music singles charts in the USA and the United Kingdom on March 5th, 1963.

The date is March 5th, 1963 and it's a Tuesday. Anyone born today will have the star sign Pisces. Spring has started to creep in and the days are beginning to get longer.

In America, the song Walk Like A Man by The Four Seasons is on top of the singles charts. Over in the UK, The Wayward Wind by Frank Ifield is the number one hit song. John Fitzgerald Kennedy is currently the President of the United States and the movie Son of Flubber is at the top of the Box Office.

The Western film "How the West Was Won" is currently being shown in movie theaters. If you were to travel back to this day, notable figures such as Ernie Davis, John F. Kennedy, Herbert Hoover and Sam Cooke would all be still alive. On TV, people are watching popular shows such as "The Danny Thomas Show", "The Twilight Zone", "The Untouchables" and "Route 66".

Children and teenagers are currently watching television shows such as "Looney Tunes", "Mighty Mouse Playhouse", "The Adventures of Spunky and Tadpole" and "Davey and Goliath". Popular toys at the moment include the likes of the Hula Hoop, Fisher Price Little People, Chatter Telephone and Tammy (doll).

If you are looking for some childhood nostalgia, then check out March 5th, 1969 instead.

Actress. Deceased
Born on March 5th, 1970
She was born exactly 7 years after this date.

Musician.
Born on March 5th, 1970
He was born exactly 7 years after this date.

Soccer player.
Born on March 5th, 1993
He was born exactly 30 years after this date.

John Fitzgerald Kennedy was the President of the United States on March 5th, 1963.

Harold Macmillan was the Prime Minister of the United Kingdom on March 5th, 1963.

Enter your date of birth below to find out how old you were on March 5th, 1963.

Here are some fun statistics about March 5th, 1963.