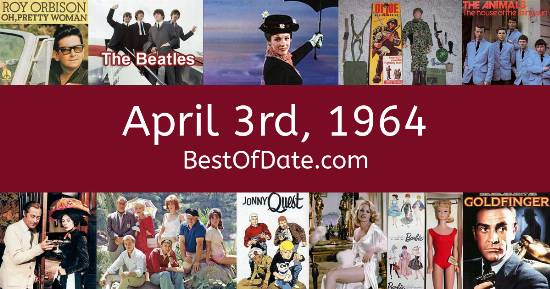 Songs that were on top of the music singles charts in the USA and the United Kingdom on April 3rd, 1964.

The date is April 3rd, 1964, and it's a Friday. Anyone born today will have the star sign Aries. Currently, people have "that Friday feeling" and are looking forward to the weekend.

The summer of 1964 is drawing closer and temperatures have started to rise. The song Can't Buy Me Love by The Beatles is on top of the singles charts in both the USA and the United Kingdom. Lyndon Baines Johnson is currently the President of the United States, and the movie It's a Mad, Mad, Mad, Mad World is at the top of the Box Office.

If you were to travel back to this day, notable figures such as Herbert Hoover, Sam Cooke, T. S. Eliot and Winston Churchill would all be still alive. On TV, people are watching popular shows such as "What's My Line?", "Wagon Train", "Rawhide" and "Steptoe and Son". Children and teenagers are currently watching television shows such as "Looney Tunes", "Noggin the Nog", "The Flintstones" and "The Dick Tracy Show".

If you're a kid or a teenager, then you're probably playing with toys such as Etch A Sketch, Big Loo, Johnny Seven OMA (toy gun) and G.I. Joe: America's Movable Fighting Man.

These are trending news stories and fads that were prevalent at this time. These are topics that would have been in the media on April 3rd, 1964.

News stories and other events that happened around April 3rd, 1964.

Check out our personality summary for people who were born on April 3rd, 1964.

Television shows that people were watching in April, 1964.

If you are looking for some childhood nostalgia, then you should check out April 3rd, 1970 instead.

Lyndon Baines Johnson was the President of the United States on April 3rd, 1964.

Sir Alec Douglas-Home was the Prime Minister of the United Kingdom on April 3rd, 1964.

Find out what your age was on April 3rd, 1964, by entering your DOB below.
This information is not saved on our server.

Here are some fun statistics about April 3rd, 1964.