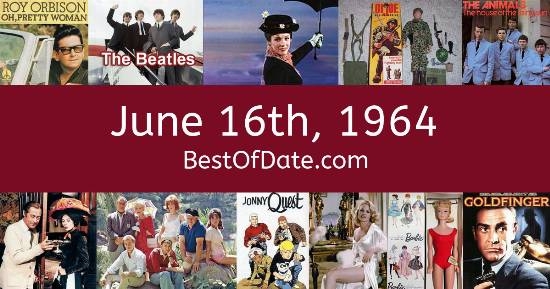 Songs that were on top of the music singles charts in the USA and the United Kingdom on June 16th, 1964.

The date is June 16th, 1964 and it's a Tuesday. Anyone born today will have the star sign Gemini. It's summer, so the temperatures are warmer and the evenings are longer than usual.

In America, the song Chapel Of Love by The Dixie Cups is on top of the singles charts. Over in the UK, You're My World by Cilla Black is the number one hit song. Lyndon Baines Johnson is currently the President of the United States and the movie The Pink Panther is at the top of the Box Office.

If you were to travel back to this day, notable figures such as Herbert Hoover, Sam Cooke, T. S. Eliot and Winston Churchill would all be still alive. On TV, people are watching popular shows such as "What's My Line?", "Wagon Train", "Hazel" and "Steptoe and Son". Children and teenagers are currently watching television shows such as "The Flintstones", "Mister Ed", "Davey and Goliath" and "The Patty Duke Show".

Popular toys at the moment include the likes of Playpal dolls, Tonka trucks, Rock-a-Stack and Army men.

If you are looking for some childhood nostalgia, then check out June 16th, 1970 instead.

German football manager.
Born on June 16th, 1967
He was born exactly 3 years after this date.

Rap artist. Deceased
Born on June 16th, 1971
He was born exactly 7 years after this date.

Lyndon Baines Johnson was the President of the United States on June 16th, 1964.

Sir Alec Douglas-Home was the Prime Minister of the United Kingdom on June 16th, 1964.