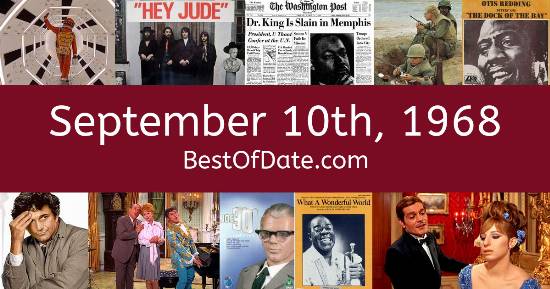 Songs that were on top of the music singles charts in the USA and the United Kingdom on September 10th, 1968.

The date is September 10th, 1968 and it's a Tuesday. Anyone born today will have the star sign Virgo. Schools have started back and autumn has arrived, so temperatures have started to cool and trees are beginning to shed their leaves.

In America, the song People Got To Be Free by The Rascals is on top of the singles charts. Over in the UK, Hey Jude by The Beatles is the number one hit song. Lyndon Baines Johnson is currently the President of the United States and the movie Rosemary's Baby is at the top of the Box Office.

If you were to travel back to this day, notable figures such as Dwight D. Eisenhower, Judy Garland, Brian Jones and Sharon Tate would all be still alive. On TV, people are watching popular shows such as "What's My Line?", "Gunsmoke", "Rowan & Martin's Laugh-In" and "Columbo". Children and teenagers are currently watching television shows such as "Atom Ant", "Milton the Monster", "The King Kong Show" and "Spider-Man".

Popular toys at the moment include the likes of Tonka trucks, Troll doll, Motorific (slot car toys) and Suzy Homemaker.

If you are looking for some childhood nostalgia, then check out September 10th, 1974 instead.

Lyndon Baines Johnson was the President of the United States on September 10th, 1968.

Harold Wilson was the Prime Minister of the United Kingdom on September 10th, 1968.

Enter your date of birth below to find out how old you were on September 10th, 1968.

Here are some fun statistics about September 10th, 1968.