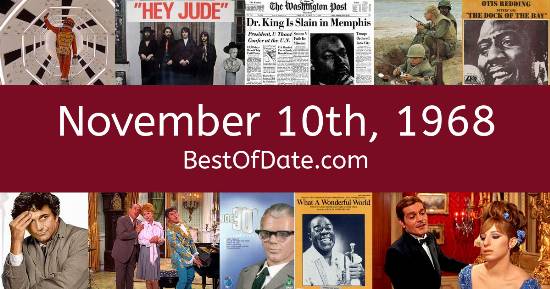 These songs were on top of the music charts in the United States and the United Kingdom on November 10th, 1968.

The date is November 10th, 1968, and it's a Sunday. Anyone born today will have the star sign Scorpio. Currently, people are enjoying their weekend.

It's November, so the evenings are getting darker and the days are getting colder. In America, the song Hey Jude by The Beatles is on top of the singles charts. Over in the UK, With A Little Help From My Friends by Joe Cocker is the number one hit song.

It's 1968, so radio stations are playing hit songs from artists such as The Beatles, Louis Armstrong, Otis Redding, The Rolling Stones, Bobby Goldsboro and Marvin Gaye. If you were to travel back to this day, notable figures such as Dwight D. Eisenhower, Judy Garland, Brian Jones and Sharon Tate would all be still alive. On TV, people are watching popular shows such as "Gunsmoke", "Gilligan's Island", "I Dream of Jeannie" and "Here's Lucy".

Children and teenagers are currently watching television shows such as "Lassie", "Milton the Monster", "The Herculoids" and "The Adventures of Gulliver". If you're a kid or a teenager, then you're probably playing with toys such as Matchbox toy cars, Captain Action (action figure), Twister mat and Best of the West (action figures).

These are trending news stories and fads that were prevalent at this time. These are topics that would have been in the media on November 10th, 1968.

Check out our personality summary for people who were born on November 10th, 1968.

If you are looking for some childhood nostalgia, then you should check out November 10th, 1974, instead.

Celebrities, historical figures, and other notable people who were born on November 10th.

Rapper. Deceased
Born on November 10th, 1971
He was born exactly 3 years after this date.

Actress. Deceased
Born on November 10th, 1977
She was born exactly 9 years after this date.

Lyndon Baines Johnson was the President of the United States on November 10th, 1968.

Enter your date of birth below to find out how old you were on November 10th, 1968.
This information is not transmitted to our server.

Here are some fun statistics about November 10th, 1968.