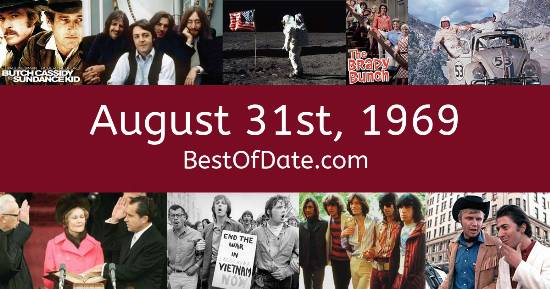 Songs that were on top of the music singles charts in the USA and the United Kingdom on August 31st, 1969.

The date is August 31st, 1969 and it's a Sunday. Anyone born today will have the star sign Virgo. Currently, people are enjoying their weekend.

The summer of 1969 is coming to an end and fall is just around the corner. In the United States, it is Labor Day weekend. People are attending barbecues and other gatherings. To many Americans, Labor Day represents the end of summer 1969. In America, the song Honky Tonk Women by The Rolling Stones is on top of the singles charts.

Over in the UK, In The Year 2525 by Zager & Evans is the number one hit song. Richard Nixon is currently the President of the United States and the movie True Grit is at the top of the Box Office. In the United Kingdom, Harold Wilson is the current Prime Minister.

On TV, people are watching popular shows such as "Bonanza", "Gilligan's Island", "Columbo" and "Hee Haw". Kids and teenagers are watching TV shows such as "The Bugs Bunny Show", "Star Trek: The Original Series", "The Adventures of Gulliver" and "Joe 90". If you're a kid or a teenager, then you're probably playing with toys such as Matchbox toy cars, Army men, Battleship (game) and Crissy (doll).

If you are looking for some childhood nostalgia, then check out August 31st, 1975 instead.

Wrestler.
Born on August 31st, 1977
He was born exactly 8 years after this date.

Richard Nixon was the President of the United States on August 31st, 1969.

Harold Wilson was the Prime Minister of the United Kingdom on August 31st, 1969.

Enter your date of birth below to find out how old you were on August 31st, 1969.