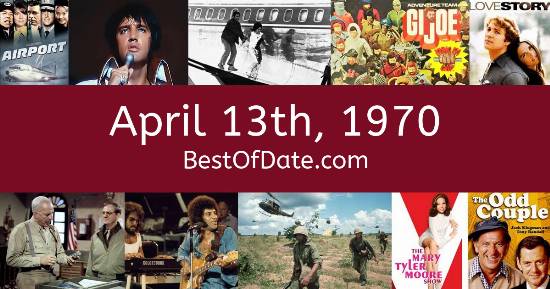 Songs that were on top of the music singles charts in the USA and the United Kingdom on April 13th, 1970.

The date is April 13th, 1970 and it's a Monday. Anyone born today will have the star sign Aries. The summer of 1970 is drawing closer and temperatures have started to rise.

In America, the song Let It Be by The Beatles is on top of the singles charts. Over in the UK, All Kinds Of Everything by Dana is the number one hit song. Richard Nixon is currently the President of the United States and the movie Marooned is at the top of the Box Office.

A biographical war film called "Patton" is being shown in movie theaters at the moment. If you were to travel back to this day, notable figures such as Jimi Hendrix, Janis Joplin, Charles de Gaulle and Sonny Liston would all be still alive. On TV, people are watching popular shows such as "The Ed Sullivan Show", "What's My Line?", "Medical Center" and "The Brady Bunch".

Children and teenagers are currently watching television shows such as "The New Adventures of Superman", "H.R. Pufnstuf", "Dastardly and Muttley in Their Flying Machines" and "The Clangers". Popular toys at the moment include the likes of Troll doll, Etch A Sketch, Motorific (slot car toys) and Snoopy Astronaut (figure).

If you are looking for some childhood nostalgia, then check out April 13th, 1976 instead.

Child actor. Deceased
Born on April 13th, 1976
He was born exactly 6 years after this date.

Spanish soccer player.
Born on April 13th, 1978
He was born exactly 8 years after this date.

Richard Nixon was the President of the United States on April 13th, 1970.

Harold Wilson was the Prime Minister of the United Kingdom on April 13th, 1970.

Enter your date of birth below to find out how old you were on April 13th, 1970.