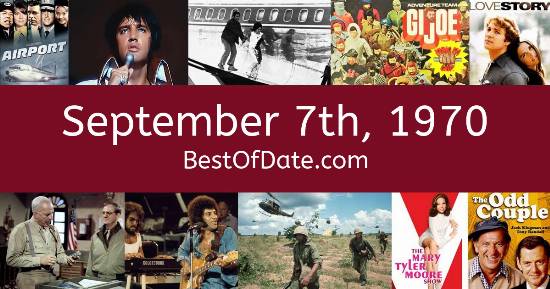 Songs that were on top of the music singles charts in the USA and the United Kingdom on September 7th, 1970.

The movie "Getting Straight" was at the top of the box office on September 7th, 1970.

My beloved son Michael was born on this date. 7th September 1979 at 3pm, but unfortunately I lost him three years later on 13th October 1973. One never forgets the heartbreak.
Posted on September 7th, 2021 13:47

The date is September 7th, 1970 and it's a Monday. Anyone born today will have the star sign Virgo. Schools have started back and autumn has arrived, so temperatures have started to cool and trees are beginning to shed their leaves.

In America, the song War by Edwin Starr is on top of the singles charts. Over in the UK, Tears Of A Clown by Smokey Robinson & Miracles is the number one hit song. Richard Nixon is currently the President of the United States and the movie Getting Straight is at the top of the Box Office.

If you were to travel back to this day, notable figures such as Jimi Hendrix, Janis Joplin, Charles de Gaulle and Sonny Liston would all be still alive. On TV, people are watching popular shows such as "The Ed Sullivan Show", "Bonanza", "Dark Shadows" and "Rowan & Martin's Laugh-In". Children and teenagers are currently watching television shows such as "Lassie", "Underdog", "The Perils of Penelope Pitstop" and "The Clangers".

If you're a kid or a teenager, then you're probably playing with toys such as Rock 'Em Sock 'Em Robots, Suzy Homemaker, Lite-Brite and Frisbee.

If you are looking for some childhood nostalgia, then check out September 7th, 1976 instead.

National holidays and famous events that fall on the 7th of September.

Richard Nixon was the President of the United States on September 7th, 1970.

Edward Heath was the Prime Minister of the United Kingdom on September 7th, 1970.

Enter your date of birth below to find out how old you were on September 7th, 1970.

Here are some fun statistics about September 7th, 1970.

Have something to say about September 7th, 1970?