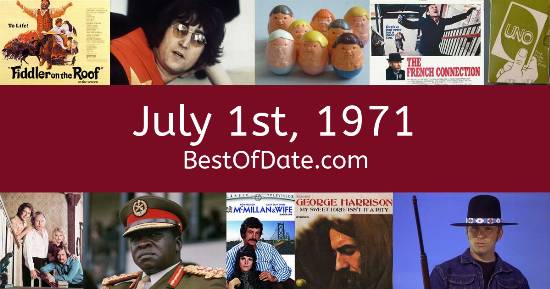 Songs that were on top of the music singles charts in the USA and the United Kingdom on July 1st, 1971.

The date is July 1st, 1971 and it's a Thursday. Anyone born today will have the star sign Cancer. In America, the July 4th celebrations are fast approaching.

It's 1971, so radio stations are playing songs from artists such as George Harrison, John Lennon, Rod Stewart, Lynn Anderson, The Rolling Stones, Three Dog Night, Carole King and The Osmonds. If you were to travel back to this day, notable figures such as Jim Morrison, Louis Armstrong, J. Edgar Hoover and Jackie Robinson would all be still alive. On TV, people are watching popular shows such as "What's My Line?", "Adam-12", "The Main Chance" and "The Mary Tyler Moore Show".

Kids and teenagers are watching TV shows such as "Heckle and Jeckle", "Skippy the Bush Kangaroo", "Skyhawks" and "The Pink Panther Show". Popular toys at the moment include the likes of Troll doll, Motorific (slot car toys), Lite-Brite and Crissy (doll).

If you are looking for some childhood nostalgia, then check out July 1st, 1977 instead.

Dutch soccer player.
Born on July 1st, 1976
He was born exactly 5 years after this date.

Richard Nixon was the President of the United States on July 1st, 1971.

Edward Heath was the Prime Minister of the United Kingdom on July 1st, 1971.

Enter your date of birth below to find out how old you were on July 1st, 1971.

Here are some fun statistics about July 1st, 1971.