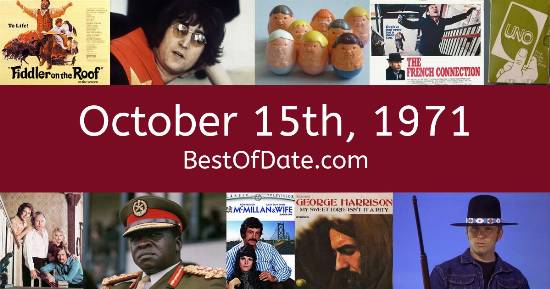 These songs were on top of the music charts in the United States and the United Kingdom on October 15th, 1971.

The movie "The Stewardesses" was at the top of the Box Office on this day.

The date is October 15th, 1971, and it's a Friday. Anyone born today will have the star sign Libra. Currently, people have "that Friday feeling" and are looking forward to the weekend.

The summer is long gone. Temperatures have started to become much cooler and the evenings are beginning to get darker. Fallen leaves have carpeted driveways, lawns, pathways and sidewalks and there's a fresh earthy scent in the ear. The song Maggie May / Reason To Believe by Rod Stewart is on top of the singles charts in both the USA and the United Kingdom.

Richard Nixon is currently the President of the United States, and the movie The Stewardesses is at the top of the Box Office. In the United Kingdom, Edward Heath is the current Prime Minister. In fashion, the hippie look from the 1960s is still popular. Clothing items such as tie dye shirts, bell-bottoms, midi skirts, gauchos and Mexican blouses are being worn by women. Meanwhile, men are wearing dark satin shirts, ethnic-looking tunics, bell bottom jeans, tweed sports jackets and turtlenecks.

It's 1971, so radio stations are playing songs from artists such as George Harrison, John Lennon, Rod Stewart, Lynn Anderson, The Rolling Stones, Three Dog Night, Carole King and The Osmonds. An action film called "The French Connection" is currently being shown in movie theaters. If you were to travel back to this day, notable figures such as J. Edgar Hoover, Jackie Robinson and Harry S. Truman would all be still alive.

On TV, people are watching popular shows such as "Steptoe and Son", "Marcus Welby, M.D.", "The Brady Bunch" and "The Odd Couple". Children and teenagers are currently watching television shows such as "The Adventures of Gulliver", "Skyhawks", "The Brady Bunch" and "The Funky Phantom". If you're a kid or a teenager, then you're probably playing with toys such as Troll doll, Army men, Twister mat and Frisbee.

These are trending news stories and fads that were prevalent at this time. These are topics that would have been in the media on October 15th, 1971.

News stories and other events that happened around October 15th, 1971.

Check out our personality summary for people who were born on October 15th, 1971.

Television shows that people were watching in October, 1971.

If you are looking for some childhood nostalgia, then you should check out October 15th, 1977 instead.

German soccer player.
Born on October 15th, 1988
He was born exactly 17 years after this date.

Richard Nixon was the President of the United States on October 15th, 1971.

Edward Heath was the Prime Minister of the United Kingdom on October 15th, 1971.

Find out what your age was on October 15th, 1971, by entering your DOB below.
This information is not saved on our server.

Here are some fun statistics about October 15th, 1971.