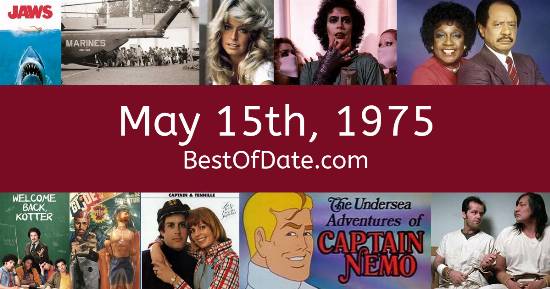 Songs that were on top of the music singles charts in the USA and the United Kingdom on May 15th, 1975.

The date is May 15th, 1975 and it's a Thursday. Anyone born today will have the star sign Taurus. The summer of 1975 has finally arrived. The weather has warmed up and the evenings are brighter than usual.

In America, the song He Don't Love You by Tony Orlando & Dawn is on top of the singles charts. Over in the UK, Stand By Your Man by Tammy Wynette is the number one hit song. Gerald Ford is currently the President of the United States and Harold Wilson is the Prime Minister of the United Kingdom.

Meanwhile, gamers are playing titles such as "Pong", "Space Race", "Gotcha" and "Pursuit". Children and teenagers are currently watching television shows such as "The Pink Panther Show", "Star Trek: The Animated Series", "Happy Days" and "The New Adventures of Gilligan". If you're a kid or a teenager, then you're probably playing with toys such as Frisbee, G.I. Joe Adventure Team, Weebles and Uno (card game).

Notable events that occurred around May 15th, 1975.

If you are looking for some childhood nostalgia, then check out May 15th, 1981 instead.

Gerald Ford was the President of the United States on May 15th, 1975.

Harold Wilson was the Prime Minister of the United Kingdom on May 15th, 1975.