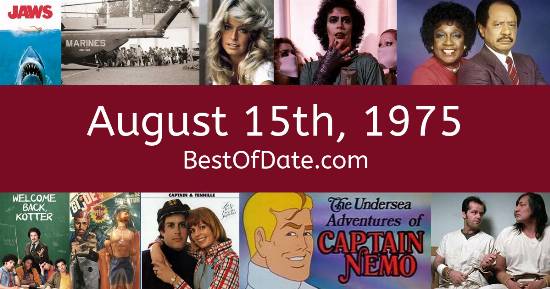 Songs that were on top of the music singles charts in the USA and the United Kingdom on August 15th, 1975.

The date is August 15th, 1975 and it's a Friday. Anyone born today will have the star sign Leo. Currently, people have "that Friday feeling" and are looking forward to the weekend.

It's summer, so the temperatures are warmer and the evenings are longer than usual. In America, the song Jive Talking by The Bee Gees is on top of the singles charts. Over in the UK, Can't Give You Anything by Stylistics is the number one hit song.

Because it's 1975, the music charts are being dominated by the likes of Billy Swan, 10cc, Alain Barriere, Morris Albert, the Salsoul Orchestra, Captain & Tennille, Elton John and David Bowie. If you were to travel back to this day, notable figures such as Eamon de Valera, Anissa Jones and Tommy Bolin would all be still alive. On TV, people are watching popular shows such as "Marcus Welby, M.D.", "The Mary Tyler Moore Show", "Maude" and "Happy Days".

Meanwhile, gamers are playing titles such as "Pong", "Space Race", "Gotcha" and "Tank". Kids and teenagers are watching TV shows such as "Mister Rogers' Neighborhood", "The Pink Panther Show", "Star Trek: The Animated Series" and "Happy Days". If you're a kid or a teenager, then you're probably playing with toys such as Battleship (game), Magnavox Odyssey, Evel Knievel Stunt Cycle and Shrinky Dinks.

If you are looking for some childhood nostalgia, then check out August 15th, 1981 instead.

Rapper. Deceased
Born on August 15th, 1985
He was born exactly 10 years after this date.

Gerald Ford was the President of the United States on August 15th, 1975.

Harold Wilson was the Prime Minister of the United Kingdom on August 15th, 1975.

Enter your date of birth below to find out how old you were on August 15th, 1975.