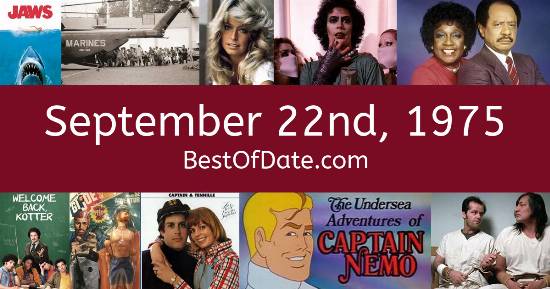 These songs were on top of the music charts in the United States and the United Kingdom on September 22nd, 1975.

The top "Box Office" movie on this date was the film "Jaws".

The date is September 22nd, 1975, and it's a Monday. Anyone born today will have the star sign Virgo. Schools and colleges are starting again and Autumn has officially arrived. As a result, temperatures are beginning to cool and trees are starting to shed their leaves.

The earthy smells of fall have started to fill the air. In America, the song Calypso / I'm Sorry by John Denver is on top of the singles charts. Over in the UK, Sailing by Rod Stewart is the number one hit song.

Gerald Ford is currently the President of the United States, and the movie Jaws is at the top of the Box Office. In the United Kingdom, Harold Wilson is the current Prime Minister. In fashion, the hippie look from the 1960s and early 1970s has disappeared. The disco look is beginning to take off. Women are wearing t-shirts, khaki pants, mood rings, kimonos and flare jumpsuits. Meanwhile, men are wearing velvet sports coats, slogan t-shirts, flannel, frilly shirts, jeans and khaki chinos.

Because it's 1975, the music charts are being dominated by the likes of Billy Swan, 10cc, Alain Barriere, Morris Albert, the Salsoul Orchestra, Captain & Tennille, Elton John and David Bowie. If you were to travel back to this day, notable figures such as Anissa Jones and Tommy Bolin would be still alive. On TV, people are watching popular shows such as "Columbo", "Medical Center", "McMillan & Wife" and "Happy Days".

Meanwhile, gamers are playing titles such as "Pong", "Gotcha", "Tank" and "Pursuit". Children and teenagers are currently watching television shows such as "Captain Kangaroo", "Mister Rogers' Neighborhood", "Star Trek: The Animated Series" and "Wheelie and the Chopper Bunch". If you're a kid or a teenager, then you're probably playing with toys such as Etch A Sketch, Battleship (game), Baby Alive (doll) and Pet Rock.

These are trending news stories and fads that were prevalent at this time. These are topics that would have been in the media on September 22nd, 1975.

Check out our personality summary for people who were born on September 22nd, 1975.

Television shows that people were watching in September, 1975.

Popular video games that people were playing in September of 1975.

If you are looking for some childhood nostalgia, then you should check out September 22nd, 1981 instead.

Singer.
Born on September 22nd, 1982
She was born exactly 7 years after this date.

Soccer player.
Born on September 22nd, 1984
He was born exactly 9 years after this date.

Gerald Ford was the President of the United States on September 22nd, 1975.

Harold Wilson was the Prime Minister of the United Kingdom on September 22nd, 1975.

Enter your date of birth below to find out how old you were on September 22nd, 1975.
This information is not transmitted to our server.

Here are some fun statistics about September 22nd, 1975.