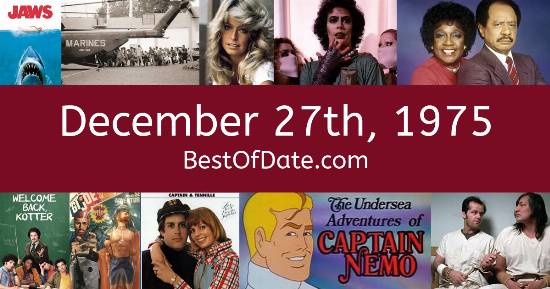 Songs that were on top of the music singles charts in the USA and the United Kingdom on December 27th, 1975.

The date is December 27th, 1975 and it's a Saturday. Anyone born today will have the star sign Capricorn. Currently, people are enjoying their weekend.

Christmas Day of 1975 has just passed and many people are relaxing at home and enjoying the holiday season. In America, the song Let's Do It Again by Staple Singers is on top of the singles charts. Over in the UK, Bohemian Rhapsody by Queen is the number one hit song.

On TV, people are watching popular shows such as "McMillan & Wife", "M*A*S*H", "Last of the Summer Wine" and "Good Times". Meanwhile, gamers are playing titles such as "Space Race", "Tank", "Pursuit" and "Gun Fight". Kids and teenagers are watching TV shows such as "The Pink Panther Show", "All in the Family", "Happy Days" and "The New Adventures of Gilligan".

Popular toys at the moment include the likes of Uno (card game), Kenner SSP Racers, Shrinky Dinks and Magna Doodle.

Celebrities, historical figures and notable people who were born on the 27th of December.

Gerald Ford was the President of the United States on December 27th, 1975.

Harold Wilson was the Prime Minister of the United Kingdom on December 27th, 1975.

Enter your date of birth below to find out how old you were on December 27th, 1975.

Here are some fun statistics about December 27th, 1975.

Leave a comment and tell everyone why December 27th, 1975 is important to you.