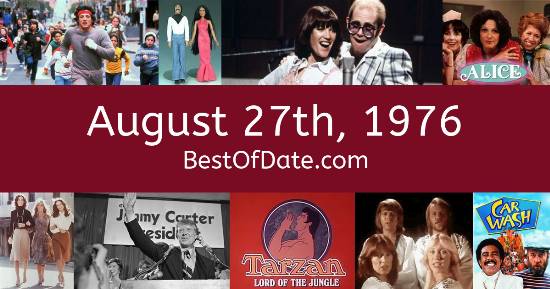 Songs that were on top of the music singles charts in the USA and the United Kingdom on August 27th, 1976.

The date is August 27th, 1976 and it's a Friday. Anyone born today will have the star sign Virgo. Currently, people have "that Friday feeling" and are looking forward to the weekend.

The summer of 1976 is coming to an end and fall is just around the corner. The song Don't Go Breaking My Heart by Elton John & Kiki Dee is on top of the singles charts in both the USA and the United Kingdom. Gerald Ford is currently the President of the United States and James Callaghan is the Prime Minister of the United Kingdom.

On TV, people are watching popular shows such as "Little House on the Prairie", "Baretta", "Starsky & Hutch" and "What's Happening!!". Meanwhile, gamers are playing titles such as "Tank", "Pursuit", "Gun Fight" and "Breakout". Kids and teenagers are watching TV shows such as "The Bugs Bunny Show", "Mister Rogers' Neighborhood", "Sesame Street" and "All in the Family".

If you're a kid or a teenager, then you're probably playing with toys such as Lite-Brite, Battleship (game), Baby Alive (doll) and Stretch Armstrong.

If you are looking for some childhood nostalgia, then check out August 27th, 1982 instead.

Celebrities, historical figures and notable people who were born on the 27th of August.

Gerald Ford was the President of the United States on August 27th, 1976.

James Callaghan was the Prime Minister of the United Kingdom on August 27th, 1976.

Enter your date of birth below to find out how old you were on August 27th, 1976.