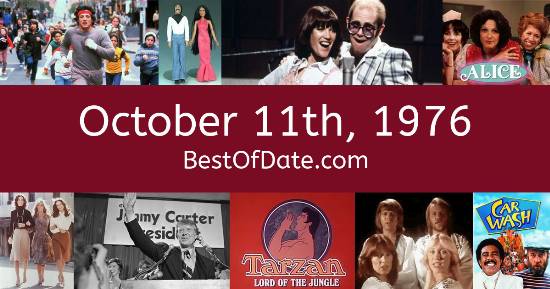 These songs were on top of the music charts in the United States and the United Kingdom on October 11th, 1976.

The movie "Burnt Offerings" was at the top of the Box Office on this day.

The date is October 11th, 1976, and it's a Monday. Anyone born today will have the star sign Libra. The summer is long gone. Temperatures have started to become much cooler and the evenings are beginning to get darker.

Fallen leaves have carpeted driveways, lawns, pathways and sidewalks and there's a fresh earthy scent in the ear. In America, the song Disco Duck by Rick Dees & Cast of Idiots is on top of the singles charts. Over in the UK, Mississippi by Pussycat is the number one hit song.

Gerald Ford is currently the President of the United States, and the movie Burnt Offerings is at the top of the Box Office. In the United Kingdom, James Callaghan is the current Prime Minister. Because it's 1976, the music charts are being dominated by the likes of ABBA, Queen, Chicago, Elton John, Kiki Dee, Wings and Rod Stewart.

In fashion, clothes have become baggier and pants have become less flared. Sports clothing and the "disco look" are both popular at the moment. Women are wearing sundresses, strapless tops with t-shirts, shoulder pads, cardigans, knee-length skirts and daisy dukes. Meanwhile, men are wearing tracksuits, flare jeans, low-top sneakers and untucked collared shirts. If you were to travel back to this day, notable figures such as Tommy Bolin, Elvis Presley, Marc Bolan and Charlie Chaplin would all be still alive. On TV, people are watching popular shows such as "Hawaii Five-O", "Emergency!", "What's Happening!!" and "Charlie's Angels".

Meanwhile, gamers are playing titles such as "Tank", "Pursuit", "Gun Fight" and "Breakout". Children and teenagers are currently watching television shows such as "Sesame Street", "Fat Albert and the Cosby Kids", "Happy Days" and "The Muppet Show". Popular toys at the moment include the likes of Lite-Brite, Battleship (game), Shrinky Dinks and Micronauts.

These are trending news stories and fads that were prevalent at this time. These are topics that would have been in the media on October 11th, 1976.

News stories and other events that happened around October 11th, 1976.

Check out our personality summary for people who were born on October 11th, 1976.

Television shows that people were watching in October, 1976.

Popular video games that people were playing in October of 1976.

If you are looking for some childhood nostalgia, then you should check out October 11th, 1982 instead.

Actress.
Born on October 11th, 1985
She was born exactly 9 years after this date.

National holidays and famous events that fall on the 11th of October.

Gerald Ford was the President of the United States on October 11th, 1976.

James Callaghan was the Prime Minister of the United Kingdom on October 11th, 1976.

Find out what your age was on October 11th, 1976, by entering your DOB below.
This information is not saved on our server.

Here are some fun statistics about October 11th, 1976.