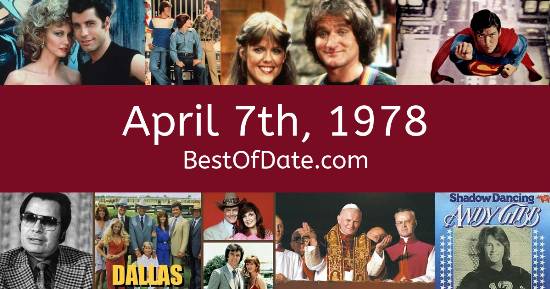 Songs that were on top of the music singles charts in the USA and the United Kingdom on April 7th, 1978.

The date is April 7th, 1978 and it's a Friday. Anyone born today will have the star sign Aries. Currently, people have "that Friday feeling" and are looking forward to the weekend.

The summer of 1978 is drawing closer and temperatures have started to rise. In America, the song Night Fever by The Bee Gees is on top of the singles charts. Over in the UK, Matchstalk Men And Matchstalk Cats And Dogs by Brian & Michael is the number one hit song.

On TV, people are watching popular shows such as "Maude", "Last of the Summer Wine", "The Love Boat" and "Dallas". Meanwhile, gamers are playing titles such as "Pursuit", "Gun Fight" and "Breakout". Children and teenagers are currently watching television shows such as "Captain Kangaroo", "Mister Rogers' Neighborhood", "Fat Albert and the Cosby Kids" and "Happy Days".

If you're a kid or a teenager, then you're probably playing with toys such as Big Jim (action figure), Dungeons & Dragons, Micronauts and Water Ring Toss.

Celebrities, historical figures and notable people who were born on the 7th of April.

Jimmy Carter was the President of the United States on April 7th, 1978.

James Callaghan was the Prime Minister of the United Kingdom on April 7th, 1978.

Enter your date of birth below to find out how old you were on April 7th, 1978.

Here are some fun statistics about April 7th, 1978.

Leave a comment and tell everyone why April 7th, 1978 is important to you.