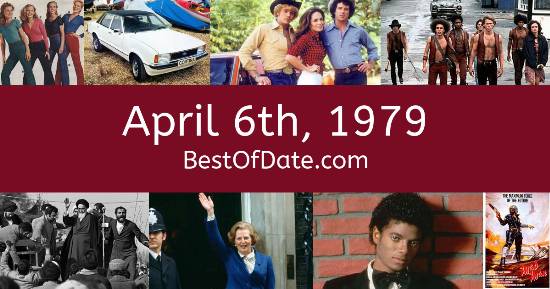 Songs that were on top of the music singles charts in the USA and the United Kingdom on April 6th, 1979.

The date is April 6th, 1979 and it's a Friday. Anyone born today will have the star sign Aries. Currently, people have "that Friday feeling" and are looking forward to the weekend.

The summer of 1979 is drawing closer and temperatures have started to rise. The song I Will Survive by Gloria Gaynor is on top of the singles charts in both the USA and the United Kingdom. Jimmy Carter is currently the President of the United States and the movie The China Syndrome is at the top of the Box Office.

If you were to travel back to this day, notable figures such as John Wayne, Alfred Hitchcock, Ian Curtis and Steve McQueen would all be still alive. On TV, people are watching popular shows such as "M*A*S*H", "Happy Days", "Little House on the Prairie" and "Chips". Meanwhile, gamers are playing titles such as "Gun Fight", "Breakout" and "Space Invaders".

Kids and teenagers are watching TV shows such as "Mister Rogers' Neighborhood", "Fat Albert and the Cosby Kids", "Happy Days" and "Diff'rent Strokes". If you're a kid or a teenager, then you're probably playing with toys such as Mattel Electronic Football (handheld game), Lego Technic, Star Wars action figures and Simon (memory game).

If you are looking for some childhood nostalgia, then check out April 6th, 1985 instead.

Jimmy Carter was the President of the United States on April 6th, 1979.

James Callaghan was the Prime Minister of the United Kingdom on April 6th, 1979.

Enter your date of birth below to find out how old you were on April 6th, 1979.

Here are some fun statistics about April 6th, 1979.