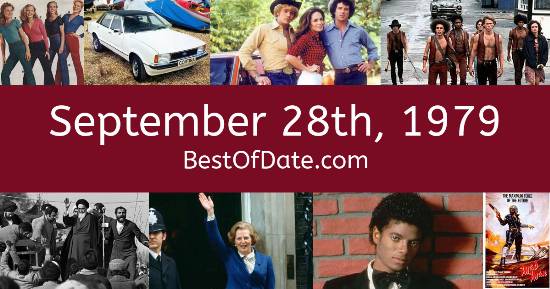 On September 28th, 1979, the following songs were at the top of the music charts in the USA and the UK.

The top "Box Office" movie on this date was the film "Monty Python's Life of Brian".

The date is September 28th, 1979, and it's a Friday. Anyone born today will have the star sign Libra. Currently, people have "that Friday feeling" and are looking forward to the weekend.

Schools and colleges are starting again and Autumn has officially arrived. As a result, temperatures are beginning to cool and trees are starting to shed their leaves. The earthy smells of fall have started to fill the air. In America, the song My Sharona by The Knack is on top of the singles charts.

Over in the UK, Message In A Bottle by Police is the number one hit song. Jimmy Carter is currently the President of the United States, and the movie Monty Python's Life of Brian is at the top of the Box Office. In the United Kingdom, Margaret Thatcher is the current Prime Minister.

On TV, people are watching popular shows such as "Hawaii Five-O", "M*A*S*H", "The Rockford Files" and "The Facts of Life". Meanwhile, gamers are playing titles such as "Gun Fight", "Breakout", "Space Invaders" and "Lunar Lander". Children and teenagers are currently watching television shows such as "Fat Albert and the Cosby Kids", "Schoolhouse Rock!", "Battle of the Planets" and "Mork & Mindy".

If you're a kid or a teenager, then you're probably playing with toys such as the Easy-Bake Oven, Big Jim (action figure), Lego Technic and Screwball Scramble.

These are trending news stories and fads that were prevalent at this time. These are topics that would have been in the media on September 28th, 1979.

Check out our personality summary for people who were born on September 28th, 1979.

Television shows that people were watching in September, 1979.

Popular video games that people were playing in September of 1979.

If you are looking for some childhood nostalgia, then you should check out September 28th, 1985 instead.

Actress / Singer.
Born on September 28th, 1987
She was born exactly 8 years after this date.

Jimmy Carter was the President of the United States on September 28th, 1979.

Margaret Thatcher was the Prime Minister of the United Kingdom on September 28th, 1979.

Enter your date of birth below to find out how old you were on September 28th, 1979.
This information is not transmitted to our server.

Here are some fun statistics about September 28th, 1979.