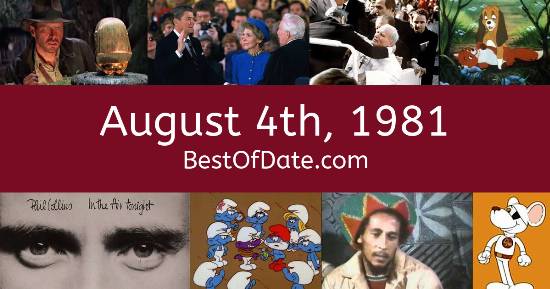 Songs that were on top of the music singles charts in the USA and the United Kingdom on August 4th, 1981.

The movie "The Empire Strikes Back" was at the top of the Box Office on August 4th, 1981.

The date is August 4th, 1981, and it's a Tuesday. Anyone born today will have the star sign Leo. It's summer, so the temperatures are warmer and the evenings are longer than usual.

In America, the song Jessie's Girl by Rick Springfield is on top of the singles charts. Over in the UK, Green Door by Shakin' Stevens is the number one hit song. Ronald Reagan is currently the President of the United States, and the movie The Empire Strikes Back is at the top of the Box Office.

If you were to travel back to this day, notable figures such as Bill Shankly, William Holden, Natalie Wood and John Belushi would all be still alive. On TV, people are watching popular shows such as "Little House on the Prairie", "The Dukes of Hazzard", "Archie Bunker's Place" and "The Greatest American Hero". Meanwhile, gamers are playing titles such as "Lunar Lander", "Asteroids", "Pac-Man" and "Missile Command".

Children and teenagers are currently watching television shows such as "The Bugs Bunny Show", "Schoolhouse Rock!", "The All New Popeye Hour" and "Mork & Mindy". Popular toys at the moment include the likes of VertiBird (toy helicopter), the Atari 2600, Speak & Spell and Monchhichi / Chicaboo.

These are trending news stories and fads that were prevalent at this time. These are topics that would have been in the media on August 4th, 1981.

Check out our personality summary for people who were born on August 4th, 1981.

If you are looking for some childhood nostalgia, then you should check out August 4th, 1987, instead.

Celebrities, historical figures, and other notable people who were born on August 4th.

Musician. Deceased
Born on August 4th, 1901
He was not alive on this date.

Singer. Deceased
Born on August 4th, 1988
He was born exactly 7 years after this date.

Love Island winner.
Born on August 4th, 1997
She was born exactly 16 years after this date.

Ronald Reagan was the President of the United States on August 4th, 1981.

Enter your date of birth below to find out how old you were on August 4th, 1981.
This information is not transmitted to our server.

Here are some fun statistics about August 4th, 1981.