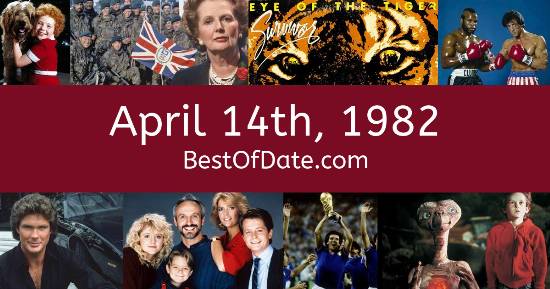 April 14th, 1982 relates to a fictional event in a movie, book, game or television series.

Songs that were on top of the music singles charts in the USA and the United Kingdom on April 14th, 1982.

The date is April 14th, 1982 and it's a Wednesday. Anyone born today will have the star sign Aries. The summer of 1982 is drawing closer and temperatures have started to rise.

In America, the song I Love Rock 'n Roll by Joan Jett & Blackhearts is on top of the singles charts. Over in the UK, Seven Tears by Goombay Dance Band is the number one hit song. Ronald Reagan is currently the President of the United States and the movie Porky's is at the top of the Box Office.

On TV, people are watching popular shows such as "Last of the Summer Wine", "Happy Days", "Chips" and "Spider-Man and His Amazing Friends". Meanwhile, gamers are playing titles such as "Lunar Lander", "Pac-Man", "Missile Command" and "Donkey Kong". Kids and teenagers are watching TV shows such as "Mister Rogers' Neighborhood", "Sesame Street", "The Smurfs" and "Danger Mouse".

Popular toys at the moment include the likes of Lite-Brite, Big Jim (action figure), Cabbage Patch Kids and Rubik's Cube.

Celebrities, historical figures and notable people who were born on the 14th of April.

Ronald Reagan was the President of the United States on April 14th, 1982.

Margaret Thatcher was the Prime Minister of the United Kingdom on April 14th, 1982.

Enter your date of birth below to find out how old you were on April 14th, 1982.

Leave a comment and tell everyone why April 14th, 1982 is important to you.