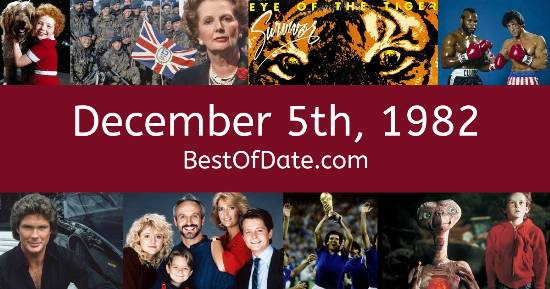 Songs that were on top of the music singles charts in the USA and the United Kingdom on December 5th, 1982.

The date is December 5th, 1982, and it's a Sunday. Anyone born today will have the star sign Sagittarius. Currently, people are enjoying their weekend.

The Christmas season of 1982 has began. In America, the song Truly by Lione Richie is on top of the singles charts. Over in the UK, I Don't Wanna Dance by Eddy Grant is the number one hit song.

Because it's 1982, the radio stations are being dominated by artists such as Survivor, Men at Work, Joan Jett & The Blackhearts, Dexys Midnight Runners, Paul McCartney and Stevie Wonder. If you were to travel back to this day, notable figures such as Karen Carpenter and Jobriath would be still alive. On TV, people are watching popular shows such as "Little House on the Prairie", "Three's Company", "Chips" and "Magnum, P.I.".

Meanwhile, gamers are playing titles such as "Space Invaders", "Asteroids", "Missile Command" and "Donkey Kong". Children and teenagers are currently watching television shows such as "Fat Albert and the Cosby Kids", "The New Adventures of Flash Gordon", "The Smurfs" and "Danger Mouse". If you're a kid or a teenager, then you're probably playing with toys such as Hungry Hungry Hippos, Simon (memory game), Speak & Spell and the Commodore 64.

These are trending news stories and fads that were prevalent at this time. These are topics that would have been in the media on December 5th, 1982.

News stories and other events that happened around December 5th, 1982.

Check out our personality summary for people who were born on December 5th, 1982.

Television shows that people were watching in December, 1982.

Popular video games that people were playing in December of 1982.

If you are looking for some childhood nostalgia, then you should check out December 5th, 1988 instead.

Actor.
Born on December 5th, 1985
He was born exactly 3 years after this date.

Soccer player.
Born on December 5th, 1995
He was born exactly 13 years after this date.

American YouTuber.
Born on December 5th, 2004
She was born exactly 22 years after this date.

Ronald Reagan was the President of the United States on December 5th, 1982.

Margaret Thatcher was the Prime Minister of the United Kingdom on December 5th, 1982.

Find out what your age was on December 5th, 1982, by entering your DOB below.
This information is not saved on our server.

Here are some fun statistics about December 5th, 1982.