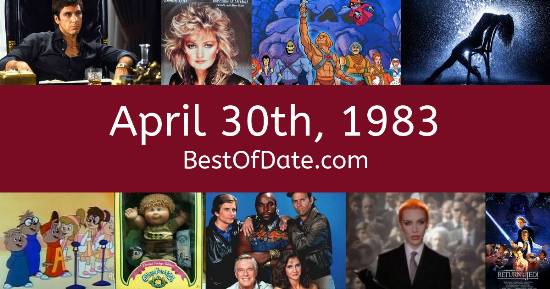 Songs that were on top of the music singles charts in the USA and the United Kingdom on April 30th, 1983.

The date is April 30th, 1983 and it's a Saturday. Anyone born today will have the star sign Taurus. Currently, people are enjoying their weekend.

The summer of 1983 is drawing closer and temperatures have started to rise. In America, the song Come On Eileen by Dexy's Midnight Runners is on top of the singles charts. Over in the UK, Let's Dance by David Bowie is the number one hit song.

Ronald Reagan is currently the President of the United States and the movie Lone Wolf McQuade is at the top of the Box Office. In the United Kingdom, Margaret Thatcher is the current Prime Minister. In fashion, women are currently wearing jelly shoes, turtleneck sweaters, loose high-waist pants, crop tops and puffer jackets lined with fur. Meanwhile, men have been ditching the disco look of the 70s in favor of athletic clothing such as tracksuits and sports jerseys. The "preppy" look has also been making a comeback.

Because it's 1983, the radio stations are being dominated by artists such as Culture Club, Michael Jackson, Irene Cara, David Bowie and The Police. If you were to travel back to this day, notable figures such as Jobriath, Marvin Gaye and Truman Capote would all be still alive. On TV, people are watching popular shows such as "Happy Days", "Laverne & Shirley", "Chips" and "The Love Boat".

Meanwhile, gamers are playing titles such as "Lunar Lander", "Asteroids", "Pac-Man" and "Missile Command". Kids and teenagers are watching TV shows such as "The Bugs Bunny Show", "Mister Rogers' Neighborhood", "Fat Albert and the Cosby Kids" and "Cockleshell Bay". If you're a kid or a teenager, then you're probably playing with toys such as Snoopy Sno-Cone Machine, Fischer Price cassette player, Space Lego and My Little Pony (figures).

If you are looking for some childhood nostalgia, then check out April 30th, 1989 instead.

Ronald Reagan was the President of the United States on April 30th, 1983.

Margaret Thatcher was the Prime Minister of the United Kingdom on April 30th, 1983.

Enter your date of birth below to find out how old you were on April 30th, 1983.