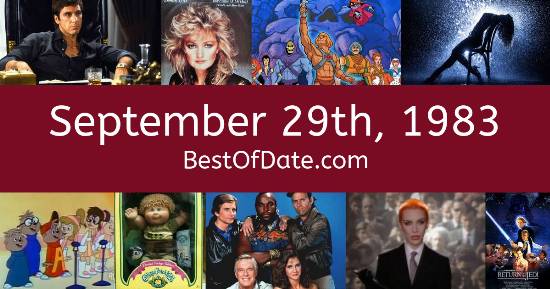 On September 29th, 1983, the following songs were at the top of the music charts in the USA and the UK.

The top "Box Office" movie on this date was the film "Mr. Mom".

The date is September 29th, 1983, and it's a Thursday. Anyone born today will have the star sign Libra. Schools and colleges are starting again and Autumn has officially arrived. As a result, temperatures are beginning to cool and trees are starting to shed their leaves.

The earthy smells of fall have started to fill the air. In America, the song Tell Her About It by Michael Sembello is on top of the singles charts. Over in the UK, Karma Chameleon by Culture Club is the number one hit song.

Ronald Reagan is currently the President of the United States, and the movie Mr. Mom is at the top of the Box Office. In the United Kingdom, Margaret Thatcher is the current Prime Minister. In fashion, women are currently wearing jelly shoes, turtleneck sweaters, loose high-waist pants, crop tops and puffer jackets lined with fur. Meanwhile, men have been ditching the disco look of the 70s in favor of athletic clothing such as tracksuits and sports jerseys. The "preppy" look has also been making a comeback.

Because it's 1983, the radio stations are being dominated by artists such as Culture Club, Michael Jackson, Irene Cara, David Bowie and The Police. If you were to travel back to this day, notable figures such as Marvin Gaye and Truman Capote would be still alive. On TV, people are watching popular shows such as "Three's Company", "The Love Boat", "The Facts of Life" and "'Allo 'Allo!".

Meanwhile, gamers are playing titles such as "Space Invaders", "Asteroids", "Donkey Kong" and "Mario Bros.". Kids and teenagers are watching TV shows such as "Happy Days", "G.I. Joe: A Real American Hero", "The Charlie Brown and Snoopy Show" and "Mister T". If you're a kid or a teenager, then you're probably playing with toys such as the Easy-Bake Oven, Screwball Scramble, the Lego train set and Masters of the Universe (figures).

These are trending news stories and fads that were prevalent at this time. These are topics that would have been in the media on September 29th, 1983.

News stories and other events that happened around September 29th, 1983.

Check out our personality summary for people who were born on September 29th, 1983.

Television shows that people were watching in September, 1983.

Popular video games that people were playing in September of 1983.

If you are looking for some childhood nostalgia, then you should check out September 29th, 1989 instead.

German soccer player.
Born on September 29th, 1984
He was born exactly one year after this date.

NBA player.
Born on September 29th, 1988
He was born exactly 5 years after this date.

Ronald Reagan was the President of the United States on September 29th, 1983.

Find out what your age was on September 29th, 1983, by entering your DOB below.
This information is not saved on our server.

Here are some fun statistics about September 29th, 1983.