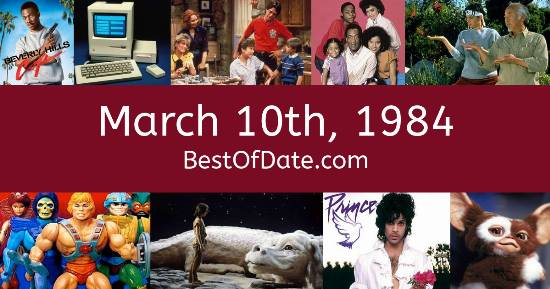 Songs that were on top of the music singles charts in the USA and the United Kingdom on March 10th, 1984:

The date is March 10th, 1984 and it's a Saturday. Anyone born today will have the star sign Pisces. Currently, people are enjoying their weekend.

Spring has started to creep in and the days are beginning to get longer. In America, the song Jump by Van Halen is on top of the singles charts. Over in the UK, 99 Red Balloons by Nena is the number one hit song.

Ronald Reagan is currently the President of the United States and the movie Footloose is at the top of the Box Office. In the United Kingdom, Margaret Thatcher is the current Prime Minister. Because it's 1984, the radio stations are being dominated by artists such as George Michael, Stevie Wonder, Wham!, Cyndi Lauper and Frankie Goes to Hollywood.

Children and teenagers are currently watching television shows such as "Captain Kangaroo", "Inspector Gadget", "He-Man and the Masters of the Universe" and "The Charlie Brown and Snoopy Show". If you're a kid or a teenager, then you're probably playing with toys such as "Hungry Hungry Hippos", "Water Ring Toss", "Masters of the Universe (figures)" and "My Little Pony (figures)".

Who was the Prime Minister of the United Kingdom on March 10th, 1984?

Enter your date of birth below to find out how old you were on March 10th, 1984.

Looking for some nostalgia? Here are some Youtube videos relating to March 10th, 1984. Please note that videos are automatically selected by Youtube and that results may vary! Click on the "Load Next Video" button to view the next video in the search playlist. In many cases, you'll find episodes of old TV shows, documentaries, music videos and soap dramas.