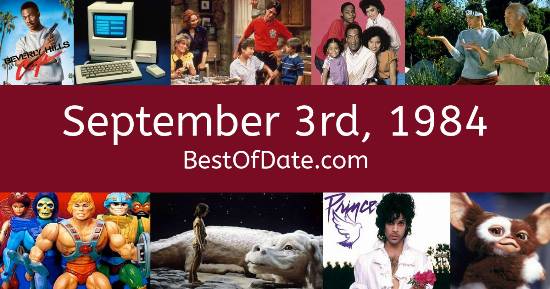 Songs that were on top of the music singles charts in the USA and the United Kingdom on September 3rd, 1984.

The date is September 3rd, 1984 and it's a Monday. Anyone born today will have the star sign Virgo. Schools have started back and autumn has arrived, so temperatures have started to cool and trees are beginning to shed their leaves.

In America, the song What's Love Got To Do With It by Tina Turner is on top of the singles charts. Over in the UK, I Just Called To Say I Love You by Stevie Wonder is the number one hit song. Ronald Reagan is currently the President of the United States and the movie Red Dawn (1984) is at the top of the Box Office.

If you're a kid or a teenager, then you're probably playing with toys such as Lite-Brite, Cabbage Patch Kids, Snoopy Sno-Cone Machine and Monchhichi / Chicaboo.

National holidays and famous events that fall on the 3rd of September.

Ronald Reagan was the President of the United States on September 3rd, 1984.

Margaret Thatcher was the Prime Minister of the United Kingdom on September 3rd, 1984.

Enter your date of birth below to find out how old you were on September 3rd, 1984.

Here are some fun statistics about September 3rd, 1984.

Leave a comment and tell everyone why September 3rd, 1984 is important to you.