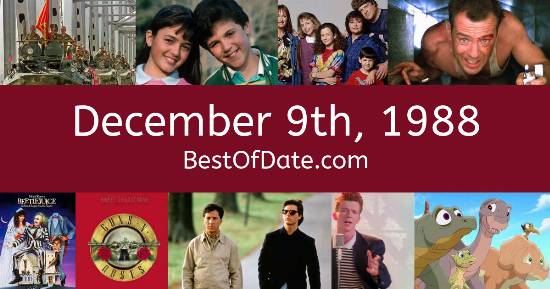 Songs that were on top of the music singles charts in the USA and the United Kingdom on December 9th, 1988.

The date is December 9th, 1988 and it's a Friday. Anyone born today will have the star sign Sagittarius. Currently, people have "that Friday feeling" and are looking forward to the weekend.

The Christmas season of 1988 has just started. In America, the song Baby I Love Your Way / Freebird Medley by Will to Power is on top of the singles charts. Over in the UK, The First Time by Robin Beck is the number one hit song.

Ronald Reagan is currently the President of the United States and the movie The Naked Gun is at the top of the Box Office. In the United Kingdom, Margaret Thatcher is the current Prime Minister. In fashion, women are currently wearing sweater dresses, short skirts, small shoulder pads, animal print, long full wool coats and bulky sweaters. Meanwhile, men are wearing tracksuits, sweatshirts, Nike Air Jordan shoes and denim.

It's 1988, so the airwaves are being dominated by music artists such as Phil Collins, Bobby McFerrin, the Pet Shop Boys, Belinda Carlisle and Rick Astley. On TV, people are watching popular shows such as "Murder, She Wrote", "The Golden Girls", "21 Jump Street" and "Full House". Meanwhile, gamers are playing titles such as "Missile Command", "Duck Hunt", "Ultima IV: Quest of the Avatar" and "Gain Ground".

Children and teenagers are currently watching television shows such as "Pingu", "ALF", "21 Jump Street" and "Count Duckula". If you're a kid or a teenager, then you're probably playing with toys such as Water Ring Toss, Cabbage Patch Kids, Big wheel (tricycle) and Micro Machines.

If you are looking for some childhood nostalgia, then check out December 9th, 1994 instead.

Celebrities, historical figures and notable people who were born on the 9th of December.

Ronald Reagan was the President of the United States on December 9th, 1988.

Margaret Thatcher was the Prime Minister of the United Kingdom on December 9th, 1988.

Enter your date of birth below to find out how old you were on December 9th, 1988.

Here are some fun statistics about December 9th, 1988.

Have something to say about December 9th, 1988?