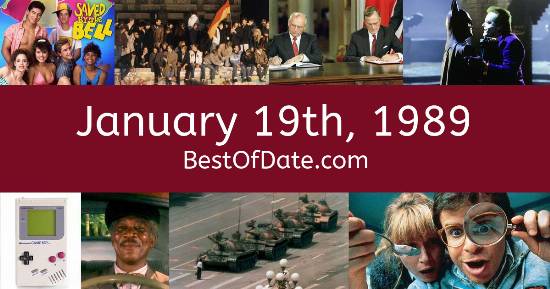 These songs were on top of the music charts in the United States and the United Kingdom on January 19th, 1989.

The movie "Rain Man" was at the top of the Box Office on this day.

The date is January 19th, 1989, and it's a Thursday. Anyone born today will have the star sign Capricorn. In America, the song Two Hearts by Phil Collins is on top of the singles charts.

Over in the UK, Especially For You by Kylie Minogue & Jason Donovan is the number one hit song. Ronald Reagan is currently the President of the United States, and the movie Rain Man is at the top of the Box Office. In the United Kingdom, Margaret Thatcher is the current Prime Minister.

In fashion, women are currently wearing sweater dresses, short skirts, small shoulder pads, animal print, long full wool coats and bulky sweaters. Meanwhile, men are wearing tracksuits, sweatshirts, Nike Air Jordan shoes and denim. It's 1989, so the airwaves are being dominated by music artists such as Madonna, The Bangles, Phil Collins, Roxette, Milli Vanilli and The B-52s. If you were to travel back to this day, notable figures such as Sugar Ray Robinson, Ruhollah Khomeini, Mel Blanc and Paul C would all be still alive.

On TV, people are watching popular shows such as "Cheers", "The Cosby Show", "Charles in Charge" and "In the Heat of the Night". Meanwhile, gamers are playing titles such as "Tetris", "Ultima IV: Quest of the Avatar", "RoboCop" and "Mega Man 2". Kids and teenagers are watching TV shows such as "Pingu", "Adventures of the Little Koala", "DuckTales" and "Denver, the Last Dinosaur".

If you're a kid or a teenager, then you're probably playing with toys such as Turnin' Turbo Dashboard, Pound Puppies, Pogo ball / Lolo ball and Sylvanian Families.

These are trending news stories and fads that were prevalent at this time. These are topics that would have been in the media on January 19th, 1989.

News stories, pop culture trends, and other events that happened around January 19th, 1989.

Check out our personality summary for people who were born on January 19th, 1989.

If you are looking for some childhood nostalgia, then you should check out January 19th, 1995, instead.

Celebrities, historical figures, and other notable people who were born on January 19th.

Rapper. Deceased
Born on January 19th, 1992
He was born exactly 3 years after this date.

Love Island contestant. Deceased
Born on January 19th, 1993
He was born exactly 4 years after this date.

Ronald Reagan was the President of the United States on January 19th, 1989.

Find out what your age was on January 19th, 1989, by entering your DOB below.
This information is not saved on our server.

Here are some fun statistics about January 19th, 1989.