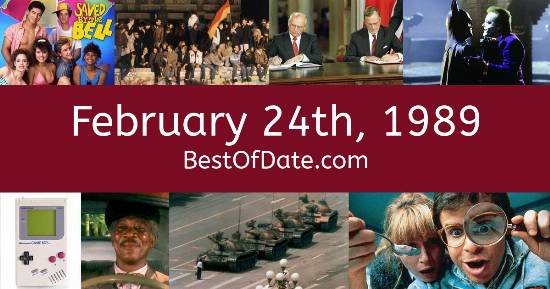 On February 24th, 1989, the following songs were at the top of the music charts in the USA and the UK.

The top "Box Office" movie on this date was the film "The 'Burbs".

On the TV Show Twin Peaks, Laura Palmer's body was discovered wrapped in plastic on this day.
Posted on July 26th, 2022 03:29

The date is February 24th, 1989, and it's a Friday. Anyone born today will have the star sign Pisces. Currently, people have "that Friday feeling" and are looking forward to the weekend.

In America, the song Straight Up by Paula Abdul is on top of the singles charts. Over in the UK, Belfast Child by Simple Minds is the number one hit song. George W. Bush Snr. is currently the President of the United States, and the movie The 'Burbs is at the top of the Box Office.

If you were to travel back to this day, notable figures such as Sugar Ray Robinson, Ruhollah Khomeini, Mel Blanc and Rebecca Schaeffer would all be still alive. On TV, people are watching popular shows such as "Knots Landing", "Matlock", "21 Jump Street" and "My Two Dads". Meanwhile, gamers are playing titles such as "Duck Hunt", "Ultima IV: Quest of the Avatar", "Super Mario Bros. 3" and "RoboCop".

Children and teenagers are currently watching television shows such as "Danger Mouse", "Pingu", "ALF" and "Full House". If you're a kid or a teenager, then you're probably playing with toys such as Speak & Spell, Transformers, Mr Frosty and the Ghostbusters Proton Pack.

These are trending news stories and fads that were prevalent at this time. These are topics that would have been in the media on February 24th, 1989.

Check out our personality summary for people who were born on February 24th, 1989.

Television shows that people were watching in February, 1989.

Popular video games that people were playing in February of 1989.

If you are looking for some childhood nostalgia, then you should check out February 24th, 1995 instead.

George W. Bush Snr. was the President of the United States on February 24th, 1989.

Margaret Thatcher was the Prime Minister of the United Kingdom on February 24th, 1989.

Enter your date of birth below to find out how old you were on February 24th, 1989.
This information is not transmitted to our server.

Here are some fun statistics about February 24th, 1989.