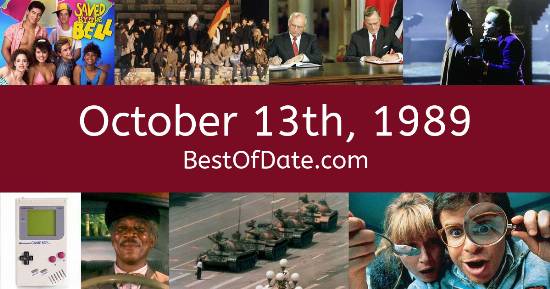 Songs that were on top of the music singles charts in the USA and the United Kingdom on October 13th, 1989.

The date is October 13th, 1989 and it's a Friday. Anyone born today will have the star sign Libra. Currently, people have "that Friday feeling" and are looking forward to the weekend.

The summer is long gone. Temperatures have started to become much cooler and the evenings are beginning to get darker. Fallen leaves have carpeted driveways, lawns, pathways and sidewalks and there's a fresh earthy scent in the ear. In America, the song Miss You Much by Janet Jackson is on top of the singles charts.

Over in the UK, Ride On Time by Black Box is the number one hit song. George W. Bush Snr. is currently the President of the United States and the movie Black Rain is at the top of the Box Office. In the United Kingdom, Margaret Thatcher is the current Prime Minister.

In fashion, women are currently wearing sweater dresses, short skirts, small shoulder pads, animal print, long full wool coats and bulky sweaters. Meanwhile, men are wearing tracksuits, sweatshirts, Nike Air Jordan shoes and denim. It's 1989, so the airwaves are being dominated by music artists such as Madonna, The Bangles, Phil Collins, Roxette, Milli Vanilli and The B-52s. On TV, people are watching popular shows such as "Dallas", "Magnum, P.I.", "Married... with Children" and "Saved by the Bell".

Meanwhile, gamers are playing titles such as "Ultima IV: Quest of the Avatar", "Super Mario Bros. 3", "SimCity" and "Super Mario Land". Kids and teenagers are watching TV shows such as "Thomas the Tank Engine", "Growing Pains", "Married... with Children" and "Babar". Popular toys at the moment include the likes of the Easy-Bake Oven, Speak & Spell, Jenga and the Game Boy.

Celebrities, historical figures and notable people who were born on the 13th of October.

George W. Bush Snr. was the President of the United States on October 13th, 1989.

Margaret Thatcher was the Prime Minister of the United Kingdom on October 13th, 1989.

Enter your date of birth below to find out how old you were on October 13th, 1989.

Here are some fun statistics about October 13th, 1989.

Leave a comment and tell everyone why October 13th, 1989 is important to you.