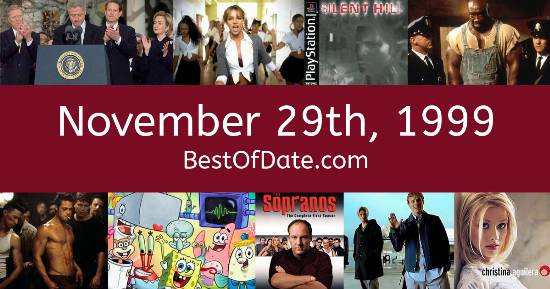 November 29th, 1999 relates to a fictional event in a movie, book, game or television series.

Songs that were on top of the music singles charts in the USA and the United Kingdom on November 29th, 1999.

The date is November 29th, 1999 and it's a Monday. Anyone born today will have the star sign Sagittarius. In America, Thanksgiven Day and Black Friday have recently come and passed. People are now beginning to look forward to Christmas.

It's November, so the evenings are getting darker and the days are getting colder. In America, the song Smooth by Santana & Rob Thomas is on top of the singles charts. Over in the UK, King Of My Castle by Wamdue Project is the number one hit song.

Bill Clinton is currently the President of the United States and the movie World Is Not Enough is at the top of the Box Office. In the United Kingdom, Tony Blair is the current Prime Minister. Meanwhile, in technology news, CDs have become the dominant format for music. People are buying CD players and the portable CD players such as the "Discman". As a result, the older cassette tape format is continuing to decline in sales.

Pokemon has become one of the most popular franchises in the world, as trading cards, toys and handheld games gross over one billion dollars. As the millennium draws to a close, people are worried about the implications of the Y2K bug. On TV, people are watching popular shows such as "King of the Hill", "That '70s Show", "The Powerpuff Girls" and "The Sopranos".

Meanwhile, gamers are playing titles such as "Syphon Filter", "Ape Escape", "Tony Hawk's Pro Skater" and "Donkey Kong 64". Children and teenagers are currently watching television shows such as "Rugrats", "Arthur", "That '70s Show" and "SpongeBob SquarePants". If you're a kid or a teenager, then you're probably playing with toys such as Jenga, the Nintendo 64, Groovy Girls and the Dreamcast.

If you are looking for some childhood nostalgia, then check out November 29th, 2005 instead.

Celebrities, historical figures and notable people who were born on the 29th of November.

Bill Clinton was the President of the United States on November 29th, 1999.

Tony Blair was the Prime Minister of the United Kingdom on November 29th, 1999.

Enter your date of birth below to find out how old you were on November 29th, 1999.

Here are some fun statistics about November 29th, 1999.