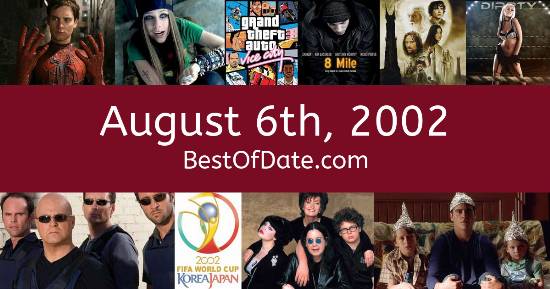 These songs were on top of the music charts in the United States and the United Kingdom on August 6th, 2002.

The date is August 6th, 2002, and it's a Tuesday. Anyone born today will have the star sign Leo. It's summer, so the temperatures are warmer and the evenings are longer than usual.

In America, the song Hot In Herre by Nelly is on top of the singles charts. Over in the UK, Colourblind by Darius is the number one hit song. George W. Bush Jnr. is currently the President of the United States, and the movie Signs is at the top of the Box Office.

If you were to travel back to this day, notable figures such as Jam Master Jay, Lana Clarkson, Curt Hennig and Fred Rogers would all be still alive. On TV, people are watching popular shows such as "Everybody Loves Raymond", "Stargate SG-1", "Malcolm in the Middle" and "The Office (UK version).". Meanwhile, gamers are playing titles such as "RuneScape", "SSX Tricky", "Metal Gear Solid 2: Sons of Liberty" and "Battlefield 1942".

Kids and teenagers are watching TV shows such as "That '70s Show", "Ed, Edd n Eddy", "Rocket Power" and "My Wife and Kids". If you're a kid or a teenager, then you're probably playing with toys such as Gogo's Crazy Bones, Groovy Girls, Betty Spaghetty (doll) and Razor (scooter).

These are trending news stories and fads that were prevalent at this time. These are topics that would have been in the media on August 6th, 2002.

Check out our personality summary for people who were born on August 6th, 2002.

Television shows that people were watching in August, 2002.

Popular video games that people were playing in August of 2002.

If you are looking for some childhood nostalgia, then you should check out August 6th, 2008, instead.

Celebrities, historical figures, and other notable people who were born on August 6th.

American child beauty queen. Deceased
Born on August 6th, 1990
She was not alive on this date.

George W. Bush Jnr. was the President of the United States on August 6th, 2002.

Enter your date of birth below to find out how old you were on August 6th, 2002.
This information is not transmitted to our server.

Here are some fun statistics about August 6th, 2002.