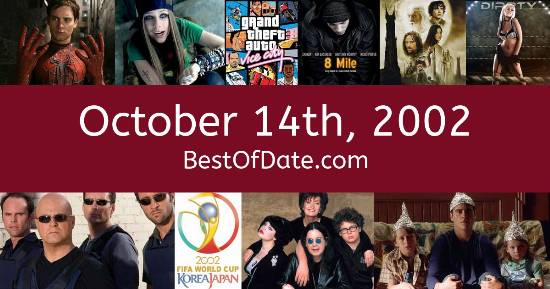 Songs that were on top of the music singles charts in the USA and the United Kingdom on October 14th, 2002.

The date is October 14th, 2002 and it's a Monday. Anyone born today will have the star sign Libra. The summer is long gone. Temperatures have started to become much cooler and the evenings are beginning to get darker.

Fallen leaves have carpeted driveways, lawns, pathways and sidewalks and there's a fresh earthy scent in the ear. In America, the song Dilemma by Nelly & Kelly Rowland is on top of the singles charts. Over in the UK, The Ketchup Song by Las Ketchup is the number one hit song.

George W. Bush Jnr. is currently the President of the United States and the movie Red Dragon is at the top of the Box Office. In the United Kingdom, Tony Blair is the current Prime Minister. In technology news, more and more people are beginning to gain access to the Internet. Internet speeds are increasing and MP3 sharing is beginning to threaten the existence of music stores.

If you were to travel back to this day, notable figures such as Jam Master Jay, Lana Clarkson, Curt Hennig and Fred Rogers would all be still alive. On TV, people are watching popular shows such as "Dawson's Creek", "The Sopranos", "Grounded for Life" and "My Wife and Kids". Meanwhile, gamers are playing titles such as "Silent Hill 2", "Grand Theft Auto III", "Tony Hawk's Pro Skater 3" and "Return to Castle Wolfenstein".

Children and teenagers are currently watching television shows such as "The Powerpuff Girls", "SpongeBob SquarePants", "Lizzie McGuire" and "My Wife and Kids". If you're a kid or a teenager, then you're probably playing with toys such as Groovy Girls, Poo-Chi (robot dog), Razor (scooter) and Bratz dolls.

If you are looking for some childhood nostalgia, then check out October 14th, 2008 instead.

National holidays and famous events that fall on the 14th of October.

George W. Bush Jnr. was the President of the United States on October 14th, 2002.

Tony Blair was the Prime Minister of the United Kingdom on October 14th, 2002.

Enter your date of birth below to find out how old you were on October 14th, 2002.

Here are some fun statistics about October 14th, 2002.