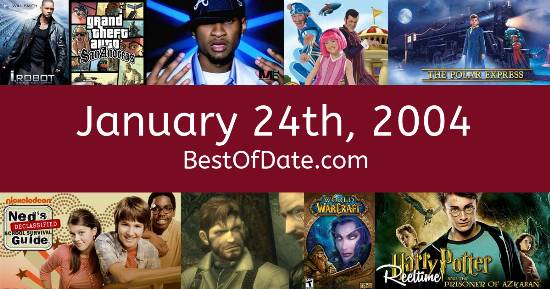 On January 24th, 2004, the following songs were at the top of the music charts in the USA and the UK.

The top "Box Office" movie on this date was the film "The Butterfly Effect".

The date is January 24th, 2004, and it's a Saturday. Anyone born today will have the star sign Aquarius. Currently, people are enjoying their weekend.

In America, the song Hey Ya by Outkast is on top of the singles charts. Over in the UK, All This Time by Michelle McManus is the number one hit song. George W. Bush Jnr. is currently the President of the United States, and the movie The Butterfly Effect is at the top of the Box Office.

It's 2004, so the music charts are being dominated by the likes of Usher, Alicia Keys, Maroon 5, OutKast, Mario Winans, the Terror Squad and Ciara. If you were to travel back to this day, notable figures such as Pat Tillman, Ronald Reagan, Ray Charles and Marlon Brando would all be still alive. On TV, people are watching popular shows such as "Frasier", "ER", "That '70s Show" and "CSI: Crime Scene Investigation".

Meanwhile, gamers are playing titles such as "Pro Evolution Soccer 3", "Tony Hawk's Underground", "Ratchet & Clank: Going Commando" and "Harry Potter and the Philosopher's Stone". Kids and teenagers are watching TV shows such as "My Wife and Kids", "My Life as a Teenage Robot", "One Tree Hill" and "Drake & Josh". Popular toys at the moment include the likes of Betty Spaghetty (doll), Yu-Gi-Oh! Trading Card Game, Beyblades (spinning top toys) and VideoNow (portable player).

These are trending news stories and fads that were prevalent at this time. These are topics that would have been in the media on January 24th, 2004.

Check out our personality summary for people who were born on January 24th, 2004.

Television shows that people were watching in January, 2004.

Popular video games that people were playing in January of 2004.

If you are looking for some childhood nostalgia, then you should check out January 24th, 2010, instead.

George W. Bush Jnr. was the President of the United States on January 24th, 2004.

Enter your date of birth below to find out how old you were on January 24th, 2004.
This information is not transmitted to our server.

Here are some fun statistics about January 24th, 2004.