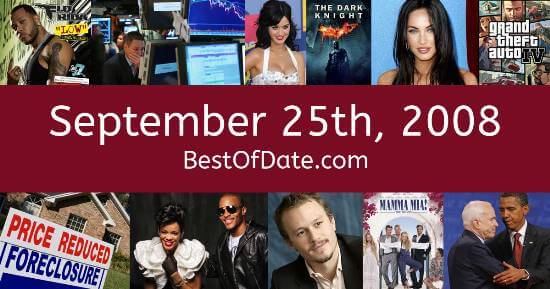 Songs that were on top of the music singles charts in the USA and the United Kingdom on September 25th, 2008:

The date is September 25th, 2008 and it's a Thursday. Anyone born today will have the star sign Libra. Schools have started back and autumn has arrived, so temperatures have started to cool and trees are beginning to shed their leaves.

The earthy smells of fall have started to fill the air. In America, the song So What by Pink is on top of the singles charts. Over in the UK, Sex On Fire by Kings of Leon is the number one hit song.

George W. Bush Jnr. is currently the President of the United States and the movie Lakeview Terrace is at the top of the Box Office. In the United Kingdom, Gordon Brown is the current Prime Minister. Practically every teenager and adult has a MySpace or a Bebo account.

A social network called Facebook is beginning to surge in popularity, replacing the likes of MySpace. It's 2008, so the music charts are filled with artists such as Flo Rida, Katy Perry, Rihanna and T.I. Barack Obama and John McCain are currently facing off against each other in the lead-up to the 2008 US Presidential Election.

Ireland has just officially declared that it has gone into recession. On TV, people are watching popular shows such as "Futurama", "Extreme Makeover: Home Edition", "Stargate Atlantis" and "Lost". Meanwhile, gamers are playing titles such as "Halo 3", "Grand Theft Auto IV", "Mafia Wars" and "Metal Gear Solid 4: Guns of the Patriots".

Children and teenagers are currently watching television shows such as "Dora the Explorer", "Ben 10", "Mickey Mouse Clubhouse" and "Phineas and Ferb". Popular toys include the likes of "Xbox 360", "PlayStation 3" and "iPod Touch".

Who was the Prime Minister of the United Kingdom on September 25th, 2008?

Enter your date of birth below to find out how old you were on September 25th, 2008.

Looking for some nostalgia? Here are some Youtube videos relating to September 25th, 2008. Please note that videos are automatically selected by Youtube and that results may vary! Click on the "Load Next Video" button to view the next video in the search playlist. In many cases, you'll find episodes of old TV shows, documentaries, music videos and soap dramas.

Here are some fun statistics about September 25th, 2008.