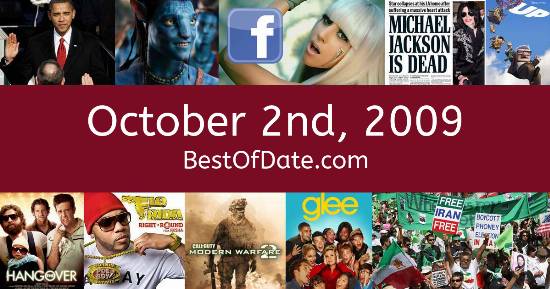 October 2nd, 2009 relates to an event in a movie, book, game or television series:

Songs that were on top of the music singles charts in the USA and the United Kingdom on October 2nd, 2009:

The date is October 2nd, 2009 and it's a Friday. Anyone born today will have the star sign Libra. Currently, people have "that Friday feeling" and are looking forward to the weekend.

The summer is long gone. Temperatures have started to become much cooler and the evenings are beginning to get darker. Fallen leaves have carpeted driveways, lawns, pathways and sidewalks and there's a fresh earthy scent in the ear. In America, the song I Gotta Feeling by Black Eyed Peas is on top of the singles charts.

Over in the UK, Break Your Heart by Taio Cruz is the number one hit song. Barack Obama is currently the President of the United States and the movie Zombieland is at the top of the Box Office. In the United Kingdom, Gordon Brown is the current Prime Minister.

The term "hipster" is currently growing in use. The word is being used to describe people who are pretentious and deliberately anti-mainstream. Meanwhile, gaming fans are currently excited about the upcoming release of Call of Duty: Modern Warfare 2. On TV, people are watching popular shows such as "Futurama", "24", "CSI: NY" and "Modern Family".

Meanwhile, gamers are playing titles such as "Call of Duty: World at War", "Left 4 Dead", "Minecraft" and "Farmville". Children and teenagers are currently watching television shows such as "The Fairly OddParents", "Peppa Pig", "Hannah Montana" and "The Hills". Popular toys include the likes of "Xbox 360", "PlayStation 3", "WALL-E toys" and "ZhuZhu Pets".

Celebrities, historical figures and noteable people who were born on the 2nd of October:

Who was the Prime Minister of the United Kingdom on October 2nd, 2009?

Enter your date of birth below to find out how old you were on October 2nd, 2009.

Looking for some nostalgia? Here are some Youtube videos relating to October 2nd, 2009. Please note that videos are automatically selected by Youtube and that results may vary! Click on the "Load Next Video" button to view the next video in the search playlist. In many cases, you'll find episodes of old TV shows, documentaries, music videos and soap dramas.

Here are some fun statistics about October 2nd, 2009.