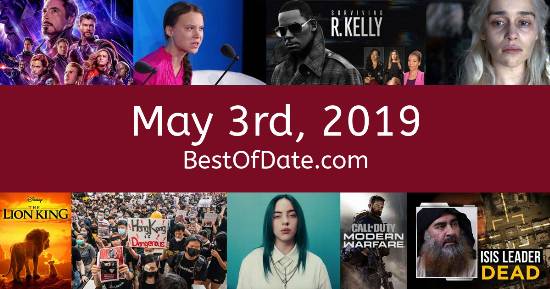 Songs that were on top of the music singles charts in the USA and the United Kingdom on May 3rd, 2019.

On this date, a beautiful little girl was born that changed my life. She gave me hope, a chance to be a dad. I love her with all my heart. Her name is Arayah Hope Beania Oneil.
Posted on July 20th, 2021 18:10

The date is May 3rd, 2019 and it's a Friday. Anyone born today will have the star sign Taurus. Currently, people have "that Friday feeling" and are looking forward to the weekend.

The summer of 2019 has finally arrived. The weather has warmed up and the evenings are brighter than usual. The song Old Town Road by Lil Nas X is on top of the singles charts in both the USA and the United Kingdom. Donald Trump is currently the President of the United States and the movie Avengers: Endgame is at the top of the Box Office.

In the United Kingdom, Theresa May is the current Prime Minister. It's 2019, so the music charts are being dominated by artists such as Lil Nas X, Post Malone, Halsey, Billie Eilish and Ariana Grande. On TV, people are watching popular shows such as "Rick and Morty", "Better Call Saul", "Stranger Things" and "Narcos: Mexico".

Meanwhile, gamers are playing titles such as "Call of Duty: Black Ops 4", "Spider-Man", "Super Smash Bros. Ultimate" and "Resident Evil 2". Kids and teenagers are watching TV shows such as "Dora the Explorer", "Doc McStuffins", "Paw Patrol" and "Game Shakers". If you're a kid or a teenager, then you're probably playing with toys such as the PlayStation 4, the Xbox One, FurReal Roarin' Tyler and the Paw Patrol Lookout Tower Playset.

Notable events that occurred around May 3rd, 2019.

Donald Trump was the President of the United States on May 3rd, 2019.

Theresa May was the Prime Minister of the United Kingdom on May 3rd, 2019.

Enter your date of birth below to find out how old you were on May 3rd, 2019.