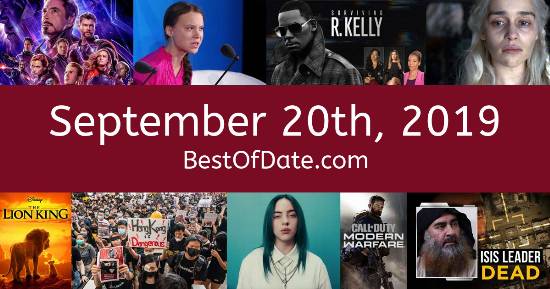 Songs that were on top of the music singles charts in the USA and the United Kingdom on September 20th, 2019:

The date is September 20th, 2019 and it's a Friday. Anyone born today will have the star sign Virgo. Currently, people have "that Friday feeling" and are looking forward to the weekend.

Schools have started back and autumn has arrived, so temperatures have started to cool and trees are beginning to shed their leaves. The earthy smells of fall have started to fill the air. In America, the song Truth Hurts by Lizzo is on top of the singles charts.

Over in the UK, Take Me Back to London by Ed Sheeran featuring Stormzy is the number one hit song. Donald Trump is currently the President of the United States and the movie It Chapter Two is at the top of the Box Office. In the United Kingdom, Boris Johnson is the current Prime Minister.

It's 2019, so the music charts are being dominated by artists such as Lil Nas X, Post Malone, Halsey, Billie Eilish and Ariana Grande. On TV, people are watching popular shows such as "Homeland", "Peaky Blinders", "Better Call Saul" and "Narcos: Mexico". Meanwhile, gamers are playing titles such as "Super Smash Bros. Ultimate", "Resident Evil 2" and "Kingdom Hearts III".

Kids and teenagers are watching TV shows such as "Doc McStuffins" and "Henry Danger". If you're a kid or a teenager, then you're probably playing with toys such as "PlayStation 4" and "Xbox One".

Who was the Prime Minister of the United Kingdom on September 20th, 2019?

Enter your date of birth below to find out how old you were on September 20th, 2019.

Looking for some nostalgia? Here are some Youtube videos relating to September 20th, 2019. Please note that videos are automatically selected by Youtube and that results may vary! Click on the "Load Next Video" button to view the next video in the search playlist. In many cases, you'll find episodes of old TV shows, documentaries, music videos and soap dramas.

Here are some fun statistics about September 20th, 2019.