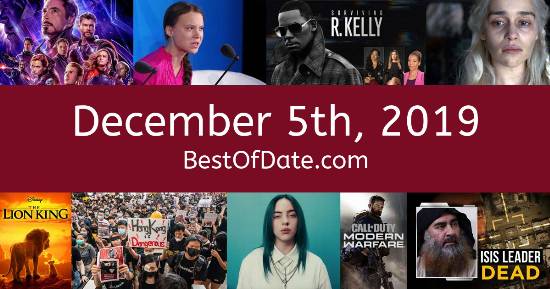 Songs that were on top of the music singles charts in the USA and the United Kingdom on December 5th, 2019.

The date is December 5th, 2019 and it's a Thursday. Anyone born today will have the star sign Sagittarius. The Christmas season of 2019 has just started.

If you're a kid or a teenager, then you're probably playing with toys such as the PlayStation 4, FurReal Roarin' Tyler, the Star Wars Droid Inventor Kit and the Paw Patrol Lookout Tower Playset.

Donald Trump was the President of the United States on December 5th, 2019.

Boris Johnson was the Prime Minister of the United Kingdom on December 5th, 2019.

Enter your date of birth below to find out how old you were on December 5th, 2019.

Here are some fun statistics about December 5th, 2019.

Have something to say about December 5th, 2019?