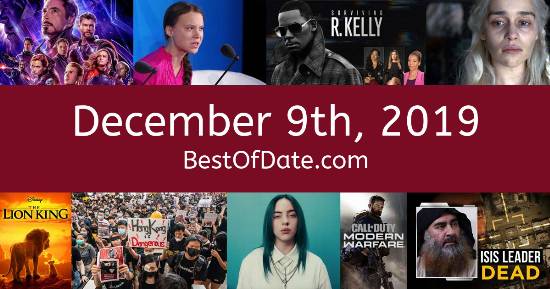 Songs that were on top of the music singles charts in the USA and the United Kingdom on December 9th, 2019.

The date is December 9th, 2019 and it's a Monday. Anyone born today will have the star sign Sagittarius. The Christmas season of 2019 has began.

In the United Kingdom, Boris Johnson is the current Prime Minister. It's 2019, so the music charts are being dominated by artists such as Lil Nas X, Post Malone, Halsey, Billie Eilish and Ariana Grande. If you were to travel back to this day, notable figures such as Derek Acorah, Kobe Bryant, Caroline Flack and Pop Smoke would all be still alive.

Donald Trump was the President of the United States on December 9th, 2019.

Boris Johnson was the Prime Minister of the United Kingdom on December 9th, 2019.

Enter your date of birth below to find out how old you were on December 9th, 2019.

Here are some fun statistics about December 9th, 2019.

Have something to say about December 9th, 2019?