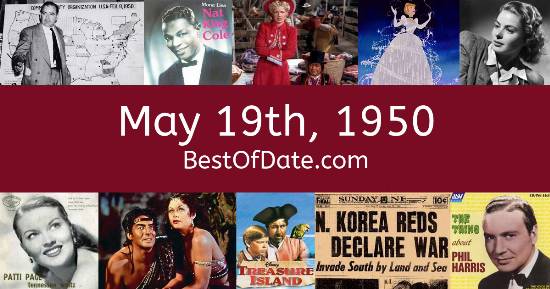 The date is May 19th, 1950, and it's a Friday. Anyone born today will have the star sign Taurus. Currently, people have "that Friday feeling" and are looking forward to the weekend.

Kids and teenagers are watching TV shows such as "Looney Tunes", "Tom and Jerry" and "Jim and Judy in Teleland". If you're a kid or a teenager, then you're probably playing with toys such as Foto-Electric Baseball, Spinning Tops, Tiny Tears (doll) and BAS-KET Miniature Basketball.

These are trending news stories and fads that were prevalent at this time. These are topics that would have been in the media on May 19th, 1950.

News stories and other events that happened around May 19th, 1950.

Check out our personality summary for people who were born on May 19th, 1950.

If you are looking for some childhood nostalgia, then you should check out May 19th, 1956 instead.

Singer. Deceased
Born on May 19th, 1951
He was born exactly one year after this date.

Italian soccer player.
Born on May 19th, 1979
He was born exactly 29 years after this date.

American music producer.
Born on May 19th, 1992
He was born exactly 42 years after this date.

Clement Attlee was the Prime Minister of the United Kingdom on May 19th, 1950.

Find out what your age was on May 19th, 1950, by entering your DOB below.
This information is not saved on our server.